Sarge and Alex lead way in sixth win on bounce

Knebworth Park chalked up a sixth straight win on Saturday in comfortably defeating Rickmansworth by 103 runs to strengthen their promotion hopes from Saracens Herts League 3a.

Skipper Adam Sergeant led from the front with an aggressive 79 as The Park piled on 274 for 4.

He featured in an opening stand of 99 with Louis Champion 41. The rest of the batsmen kept up their dominance through Archie Stephens 49, Charlie Randall 54 and Matt Hutchinson 21 not out and a quick cameo from Rob Morley 10 not out at the end.

The dry wicket aided the spinners, so it was a bonus for Knebworth when opening pacemen Gareth Jones 2 for 26 and Randall 1 for 27 made early inroads into the visitors batting and with off spinner Jack Orchard bagging a wicket they were struggling at 56 for 4.

Alex Richmond then joined the attack and with fellow spinner Hutchinson the visitors found runs hard to come by. Hutchinson was unlucky not to take a wicket as he repeatedly troubled the batsman while Richmond ripped through the middle and late order in taking an excellent 5 for 37. While The Park’s fielding wasn’t at its best, Orchard took a brilliant diving catch for one of Richmond’s wickets. With Amelia Kemp bagging a wicket near the end Rickmansworth were bowled out for 171.

The seconds came up against a strong and well organised Berkhamsted XI after losing the toss and being asked to field, Park never really stopped the flow of runs on a decent batting track with a lightning outfield.

With the introduction of Park’s spinners wickets fell at fairly regular intervals, but with a total of seven dropped catches fielding could have helped stem the ease in which Berkhamsted were scoring. Berkhamsted ended their innings with 315/8.

With such a large score to try and chase, along with a relatively inexperienced batting line up it was key for the openers to build a decent foundation with the aim to at least salvage some batting points, however a run out early on never helps! In the end it was only captain Mark Woods looking likely to score runs making 40, with the inexperienced, wickets started falling quickly with Park eventually being bowled out for 114.

The thirds went down by three wickets to Cheshunt Rosedale 3rds but could so easily could have pulled off a win.

A series of dropped catches allowed the visitors best batsman Ben Fitts 66 to capitalise. Syed Abdi 2 for 29 and Jonathan Cirkel 3 for 12 were the pick of the bowlers as Cheshunt reached 157 for 7 in chasing down Knebworth’s 156 for 9 where Cirkel 39 and Adam Hassall 27 top scored. 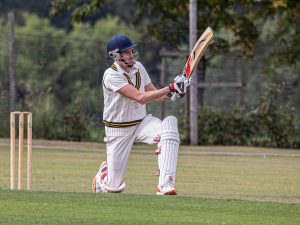 Under 14 Rafi Combarro had a fine game taking 3 for 25 and then hit 37 and with skipper Miles Baron 58 led a determined effort.