Good win for 4s vs Flitwick

They say “catches win matches” and that proved to be true when Flitwick came to The Park on a beautiful day for cricket.  With KPCC winning the toss and electing to field, the experienced opposition skipper fell with the score on 11 to a superb one-handed diving catch by Toby Brown at short extra-cover from Richard Wheeler’s second over – part of his excellent spell which was to end with 4 wickets.

The second wicket to fall (on 14 – the visitors’ no.3) was the result of a good ball catching off-stump from Richard and then the 3rd with one of Phil Wheeler’s 3 catches behind the stumps.  The no.2 and 5 continued to build a sensible partnership taking the score to 50 before skipper Jonathan Cirkel caught a fine one-handed catch high at 1st slip.

The young other Flitwick opener batted well, seeing off Richard’s whole 8 over spell and that of Ryan Loonan’s 5 over spell (5-0-27-0) the other end and part of David Mantle’s before he fell to John Inman’s first ball.  John struck with the very next ball too leaving Flitwick wabbling at 63 for 6.  A bit of rebuilding from the experienced no.7 saw the score push through to 85 before Phil too a catch from David’s last over which was just rewards for a tidy spell (8-1-24-1).  John continued his tradition of causing opposition trouble and finished with 6-1-13-2 but it was the entry of Toby Brown who wrapped up the Flitwick tale with first a good catch by Ryan at slip followed by another catch for Phil and then bowling the no.10.  Stunning figures of 1.3-0-2-3.

Flitwick finished their innings on 91 from 28.3 overs and it really was a story of excellent catches and a superb fielding effort that kept them to this low target.

However, KPCC’s reply didn’t start brilliantly with Millie Dyer falling in the third over with the score on 1 followed by Phil in the 6th over with just 15 on the board.  With Lizzie Ruxton falling 2 overs later and Wayne Hunt in the 9th with the score on 23-4, things looked like The Park might fail with what should be an easy target.

Jonathan though had other ideas and when he joined Richard at the crease, a few 2s being run but Jonathan taking the attack to the bowlers saw KPCC accelerate to 52 before Richard (7) was caught with Jonathan having moved quickly to 26. John joined JC at the crease and having padded up to the young spinner was given out LBW bringing Ryan to the crease to join JC.  Ryan did a great job holding up one end while Jonathan went through to his half-century from 31 balls with 6 fours and 3 sixes.  Ryan saw KPCC home with a couple of nicely timed boundaries finishing on 9* and JC finishing on 58*.

Another league game played in excellent spirit which is the key in the Regional divisions. 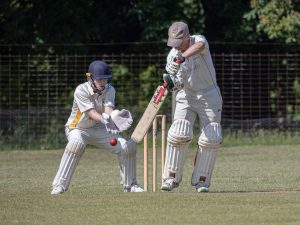 4s crash back to earth with heavy defeat at Hitchin
June 20, 2021
Shop online