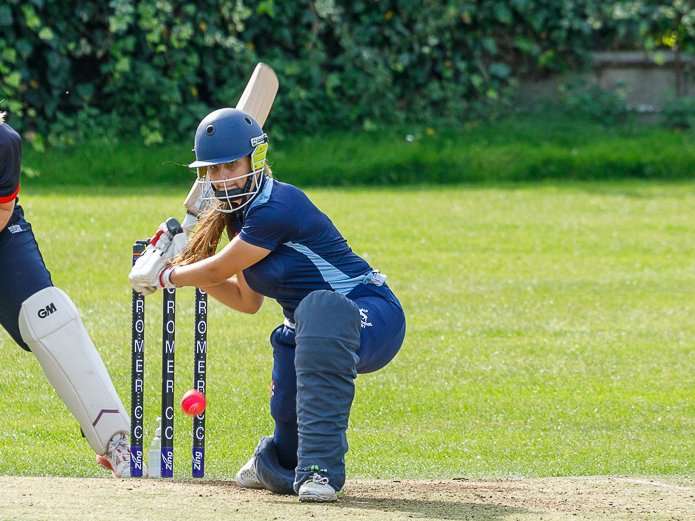 With nine teams in the 4th team’s league, it was their turn to have a week off from league cricket.  A home fixture therefore had been agreed between The Park and Old Barclays.  It was definitely friendly with great spirit and joking between the sides as well as some decent cricket being played.

JC managed to inexcusably win the toss again and asked the visitors to bat first on what was a damp pitch (more from being covered than from rain).  Missing a couple of seamers from the side this week, the opening spell duties were given to Bella and Drew.  Both bowled tidily enough and Drew was rewarded with a well taken stumping by Alex in his 2nd over but anything slightly short just sat to be hit due to the slow conditions and the opposition hitting powerful boundaries.  However, despite this, the first 7 overs only went for 36 but with some lusty blows and unusual full tosses from Drew (4-0-30-1) the score advanced to 53 from the next over and another 10  from Bella’s (6-1-39-0) next two saw OBs accelerate to 77 from 11.

With a big total likely to be posted, new member Touseef was introduced into the attack to join David Mantle and the two of them bowled superbly to really peg back the scoring.  David with his excellent accuracy and Touseef’s pace and accuracy causing the batsmen trouble; so much so that by drinks the score had only moved to 109 with two more wickets falling – the first to Touseef knocking back off-stump of the OB’s dangerous looking no.4 and then Catherine taking a skied catch at mod-off from David’s bowling.

The next 7 overs was much the same with good accuracy with John having been brought into the attack to replace Touseef (after 5 of his excellent overs) and Cathine replacing David after his tight 8 over spell (8-0-36-1). With plenty of wickets in hand, OBs continued to bat freely and hit some big 6s from anything over pitched and it was only an excellent high left-handed catch on the boundary by the skipper from a full-toss from John which prevented the no.3 from reaching his 50 with another maximum.

The two spinners kept things relatively tight other than a couple of loose overs from CC with some powerful hitting and Alex took another good stumping from John and then another from Catherine to remove the top scoring (65) no.6.  Some more boundaries followed but so did wickets with Catherine getting her second of a good spell (except 2 expensive overs) (8-0-62-2) and the returning Touseef closing out an excellent debut spell (7-0-26-2) with an LBW.

Old Barclays finished on a good 239-9 but The Park should be happy with an excellent fielding display.

The Park’s reply started positively with Millie (15) and Phil putting the bad ball away with Phil (26) hitting the ball particularly cleanly and the run chase was on target with 36 from the first 6.  However, the first change bowler bowled a lovely in-cutter to remove Phil and with Touseef (2) playing a big slog and getting caught from a top edge soon after from the slow opening bowler, KPCC were quickly 39-2.  Imogen was bowled for 2 soon after and the skipper (8) didn’t steady things by being caught at slip off a loose drive.  So, the promising start unravelled to 51-4 in the 11th over.

Catherine who had arrived at the wicket with the fall of Imogen looked in positive mood and it was just as well.  She hit several crisply hit 4s but the wickets around her continued to fall.  Firstly John (1) from a well taken low catch at slip and then Alex was bowled for 0.  With the Park in all sorts of trouble at 74-7, a reasonable score looked completely out of the question.  However, with Drew being asked to “just stay there with CC”, he did just that but also managed some good shots too despite being hit with his very first delivery on a full-toss no-ball.

Catherine continued to dominate the bowlers and with some good running plus a shot of the day straight drive, she accumulated while Drew kept out the better deliveries he faced.      Drew eventually departed for a well made 17 and a vital partnership of 67.  Bella (4) was bowled to give Z.Shoaib his 5th wicket and Catherine struck another 4 to reach an excellent 48 ball half-century.

David joined CC at the crease but unfortunately a mistimed drive saw Catherine’s fine 58 end the KPCC innings and her maiden 50 for the club.

Too many wickets given away by the early to mid-order batters left too much work for the tail to do and this is something we need to change to prevent too many run chases being down to one batter.  However, the game itself was played in excellent spirit and we’d certainly welcome Old Barclays back for a re-match!