2s win with individual batting success and a hat-trick too

The 2s recorded their first win of the season against St Albans on Saturday with a fine all round display. Having won the toss, skipper Rob Morley put the park into bat on what was a lovely day for cricket. Mark (129*) and Matt Inman (17) raced to 50-0 off 10 but a few quick wickets from St Albans looked to hault the good start made by the park. With some solid batting from Amelia (44) and Mark the park rebuilt to 135 off 35 overs. Feeling like we were behind the rate, Amelia and Mark started to take the game to the St Albans bowlers very quickly started to up the rate again. A faultless innings from both saw Mark get to his maiden century for the club and with a cameo from Lewis Hutchinson (16) saw the 2s get their biggest score of the season.

The 2s started off well in the field and with disciplined bowling from Sam Heron (9.4-0-52-3) and Jack Randall (5-0-23-0) set the tone for the innings. With wickets falling regularly in clusters it always felt like a matter of when for the park and that couldn’t be more true when Ian Hildrebandt (5-0-33-4) took his first Hat trick for the club as we had St Albans 70-7. You could forgive the park for getting slightly complacent given the hot weather and position we found ourselves in but St Albans batsman started to play their strokes and at one point looked like they could take the game away from us. Amelia (5-0-22-1) looked to bring control back to the park and took the much needed wicket to break the St Albans partnership and that left Sam Heron to take the final 2 wickets. A much needed win for the 2s! 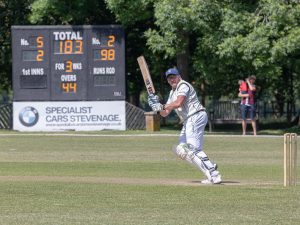 Mark clipping the ball off his legs to take him to his maiden ton
Categories: League, Match Report, NewsBy EditorJune 14, 2021