After last week’s crushing win over Stevenage, KPCC’s young first team was brought back down to earth by a heavy defeat to Berkhamsted.

On a baking hot day, skipper Charlie Randall won the toss and chose to field first, hoping to build on the impressive bowling performance from the previous week.

It looked like Park were going to carry on from where they left off with Gareth Jones clean bowling the Berkhamsted opener in the first over thanks to a poor leave.

This was to be the sole bright spot for the opening 10 overs as Park failed to capitalise on a good opening spell from youngster Ollie O’Brien with several dropped chances going down off his bowling and the left-handed Berkhamsted opener playing and missing frequently outside off stump.

A breakthrough did then come as skipper Charlie juggled a catch off O’Brien but managed to hold on.

This was soon followed by more Randall fielding heroics, swooping from point and running out the Berkhamsted skipper.

The game then began to drift away from the Park as the opening bat took advantage of the dropped catches, striking with increasing authority and confidence.

However, whilst the run rate had come under control, Berkhamsted’s opening bat had moved past 50 and built a nice partnership with the number 8.

It took the return of Gareth Jones for a tireless six-over spell to finally dismiss him, bowled trying to find quick runs.

The number 8 continued to hit powerfully into the leg side and as Knebworth tired in the field, several more chances went down and the runs accumulated.

Park picked up a couple more wickets in the final few overs with O’Brien picking up a deserved second and Jones a third – a fitting reward for an energetic and unlucky final spell.

Berkhamsted finished on 251-8 which Park believed was about par on a good deck and rapid outfield.

However, Park’s hopes of a victory swiftly vanished thanks to an awful start.

U14 Kobie Richmond, on first team debut after a stunning 99 the week before, was dismissed in the first over off a leading edge and Mo Asif would follow shortly after in a similar fashion.

The Berkhamsted opening pair then applied the squeeze with a tight and controlled spell as Archie Stephens was bowled by a ball that kept low straight after a vicious bouncer that struck him on the handle.

Tom Hills and Ollie O’Brien attempted to rebuild but struggled for any timing and when Hills was yorked for 11 and O’Brien caught acrobatically in the slips, it looked like it could get embarrassing.

A battling 31 from Matt Inman, full of deft dabs and glances with good support from fledgling all rounder Gareth Jones,saw Park creep past the 100 mark but in the end the impressive persistence and excellent fielding of Berkhamsted saw Park fall to 111 all out, a 140-run loss.

A chastening day for a young Park side but some important lessons to be learned, chiefly ‘catches win matches’.

Knebworth Park 2nd XI got their first win of the season after an all round team performance saw them beat Old Camdenians.

Debutant Ben Parkash (37) and Guy Warman (26) helped put Knebworth in a good position at the halfway point of the team’s innings. Despite a few cheap wickets, Mark Woods (48 not out) and Niels Hart with his first half century for the club (50) added impetus and took Knebworth to 247 for 8 off their 45 overs.

Old Camdenians were behind the rate throughout their innings with every bowler playing their part in restricting runs as they ended on 217 for 7.

Alex Richmond was the pick of the bowlers with 2 wickets from his 9 overs. Winning by around 40 runs, there were plenty of positives to take into the next game. 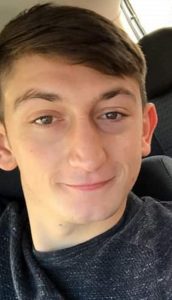 Ryan Hassall, pictured, struck a brilliant 148 not out to power the thirds to a terrific nine wicket win over Welwyn Garden City 4ths.

He and stand-in skipper and dad Adam added 150 for the first wicket.

The day didn’t start well for Adam when he lost the toss and had to field first in the heat.

Wickets were hard to come by and it took until the 12th over to breakthrough. The Welwyn batsmen played well and were scoring at four an over. The second wicket was a sharp catch by Kezia Hassall at midwicket.

Welwyn began to accelerate and were on target for a big score until Darren Hopcraft took a wicket in his first over. Knebworth battled hard and restricted the visitors to 243 for 3.

The chase was on. Adam Hassall played the anchor role and Ryan the aggressor.

And, boy, was he aggressive. Ryan’s 50 came up in quick time and feeling comfortable he opened up. Adam pitched in with some nice drives and the 100 partnership came up inside 14 overs. Ryan was now hitting sixes for fun. Adam perished as the partnership passed 150.

Hopcraft joined Ryan and the onslaught continued. The pair played nicely and the 200 came up in the 28th over. Ryan hit the winning boundary in the 33rd over, finishing on 148 not out having found the boundary more than 20 times.

From pre-toss inspection, it was clear the pitch was going to be ‘interesting’ and potentially likely to get ‘more interesting’. Skipper Jonathan Cirkel won the toss and elected to bat.

With the opposition constantly talking, making field adjustments and in no apparent rush to keep things moving despite the heat, the first few overs took an age.

Millie Dyer (8) played solidly with excellent technique but initially struggled for runs while Nick Pain (9) faced from the more lively end with 2 out of 3 balls in an early over rising to shoulder height from a length before he slashed one for six over the very short point boundary.
John Inman came in at three and batted well despite the constant threat of the odd bounces.

Phil departed after being stumped leaving Jonathan to join John at the crease.

The pair looked set for a good partnership after some well- timed boundaries from Jonathan (16) before he was caught off his glove off another riser at slip after the keeper deflected it.

Nick Banks hit a couple of nice blows to keep the scoreboard ticking.

With Tye Green still taking what appeared long enough for a “roast dinner to be made and eaten” for their sanitising breaks and level of ‘noise’ in the field not reducing, it wasn’t easy for any batter to retain concentration.

Charlotte Banks replaced her father and soon after John departed LBW for a well-made 33.

The key run partnership then started with Catherine Cirkel and Charlotte both timing the ball superbly and playing some elegant and also powerful shots to put the Park in a good position.

Catherine (30) and Charlotte (26) both were out shortly before the close of the innings but Lizzie Ruxton ran some quick singles and Joseph Barnes faced a couple of balls including one hitting him in his helmet.
The Park finished with a promising 156.

There was a feeling that the home team would come out ‘swinging’ due to the nature of the pitch, the very small boundary one side and the general ‘character’ of the side. This was proven to be accurate.

Charlotte bowled well from one end with several balls rising as they had in the Park’s innings. Millie opened from the other end but struggled with length with the Park leaking too many runs in the opening four overs.

However, Charlotte tightened up quickly and was rewarded with the first wicket again being taken off a high bounce with the batter being caught off his glove by Jonathan at slip.

Jonathan then made another breakthrough when he replaced Millie at the other end with Phil taking the catch at backward gully
From there though, the other big-hitting opener who twice got dropped quickly got to his 50 with a number of sixes over the short boundary despite John tying things up well from the other end and he eventually made the breakthrough trapping the opener LBW.

Tye Green’s number 4 batted well and in a more orthodox manner and stayed to the end of the game with the number 5 (opening bowler) slogging his way to 25 despite tidy bowling by Catherine and John before being well caught at deep mid-on by Catherine off Lizzie’s bowling when she replaced John.

Despite the finish coming relatively early with Tye Green winning in the 27th over, it wasn’t a poor performance by KPCC with the loose deliveries being well punished by the opposition hitters and the poor pitch, as is common, suiting the less orthodox batting of home sides than the correctness of the visitors’.

Thanks go to Joseph Barnes for playing after a very late call-up.