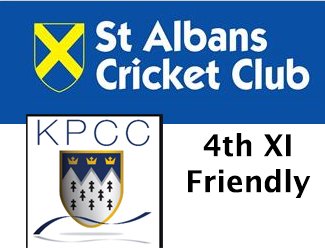 With the league season already over for the Park’s 4th XI a friendly against St Albans 4s was arranged late on Friday. For many, it was the first experience of playing a game on astro but the wind was a far bigger factor in the match than the surface.

St Albans won the toss and elected to bat and the openers built a very tidy opening partnership despite the best efforts of Charlie M-S (5-0-38-0) and Imogen L (6-0-38-0) opening the bowling. The lack of seamers with pace in the Park’s side was to cost them in the long run with the wind and pitch holding anything up not bowled on a perfect length and making it relatively easy for some powerful blows to be dealt by the opposition batsmen. The first wicket didn’t fall until 111 in the 15th over when Lizzie Ruxton who was the pick of the bowlers on the day got the first of her 3 wickets with Charlie taking the catch from the fast scoring opener (71) who had taken John I for 3 sixes in his first over. The fall of the wicket slowed the scoring briefly with Lizzie striking again in the 17th & 21st and John in the 20th. Lizzie finished with 8-0-3-45 and John 8-0-56-2.

The thought of a collapse or preventing St Albans from building a big total rapidly disappeared though with their number 4 and 7 building a great big hitting partnership to take the score to 253 before the fall of the next wicket in the 35th over Alex stumped the no.7 from Joseph’s bowling and then Catherine, coming on later than perhaps she should have bowled the no. 4 for an excellent 97. A mammoth 296-7 was the target set.

Knebworth’s reply started slowly due to the much quicker and more accurate seamers of St Albans with Nick P and Richard J getting to 11 in the 6th over before Nick was bowled and with Jonathan joining Richard at the crease, Richard departed in the 7th over. Jonathan having escaped a chance which should have been taken by the keeper was then undone by a very good fast yorker leaving the Park in trouble at 35-3 in the 14th.

However, despite us knowing the total was never going to be achieved, Phil (at 4) & Catherine (at 5) reestablished some solidity to the Park’s innings and built a good partnership with Phil punishing the few bad balls and Catherine playing sensibly and facing a number of troublesome rising balls. They built a partnership of 63 in 16 overs which was eventually broken with Catherine falling to a dubious low catch claimed at midwicket. Lizzie unfortunately departed quickly but with John joining Phil, Phil continued to battle away and reached a well-deserved 51 before being bowled in the 34th over. With nothing to play for except pride, Alex L, Charlie MS and Imogen all tried their best to score some quick runs at the end.

The park finished on 113-8 at the end of the 40 overs. A one-sided result perhaps but the game was played in good spirits and everyone agreed it was much better getting the friendly played than going without a match!