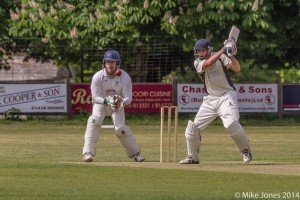 Rejuvenated Knebworth Park clinched their third win in five matches to give themselves an outside chance of avoiding relegation with one match left.

In a game they had to win to avoid the drop they restricted fellow strugglers Kings Langley to 197 and went on to comfortably win by five wickets by reaching 186 for 5, a target reduced because of a short rain break.

They achieved the win after looking in trouble at 24 for 2. Josh Roseberry, following up his 96 the previous week, and Sibet Hussain turned the game their way with a fine stand of 148.

Roseberry, batting with discipline, finished unbeaten on 66, while Hussain unleashed 14 fours in his 79 ended when he was run out as they scampered an unnecessary single with victory in sight.

With the light fading both Archie Stephens and Louis Clayton fell cheaply before Ollie O’Brien, another of the Park’s youngsters, helped Roseberry, pictured, coast over the line with five overs to spare,

Earlier, The Park bowled with control and discipline on another flat batting track at Knebworth.

The pace attack put the visitors under pressure from the start repeatedly beating the bat as they crawled to 46 for 2 off the first 20 overs.

Their innings continued slowly as the spinners Sunny Iqbal (1 for 29) and Mo Asif, with 1 for 12 in his ten overs, made runs hard to come by.

The visitors’ score was only boosted with a flurry at the end, with 52 coming off the last five overs to end on 197 for 8, thanks largely to a sparkling 49 not out from Liberty Maher.

Gareth Jones took 3 for 55 although his last four overs spoilt his figures.

Considering The Park failed to register a win in the first 12 games, it’s remarkable that they are now within a shout of surviving in Division One.

All will depend on the results on the final day of the season this Saturday with only 15 points separating the bottom four. Two of those, Sawbridgewortth and Harpenden II are playing each other, while Knebworth travel to Ickleford, needing to win or at the very least take a sizeable number of points.