Seconds’ bowlers fire in battling victory but other sides struggle 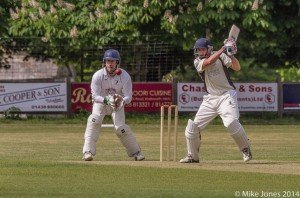 Knebworth Park’s tough season continued as they suffered a heavy defeat at home to Ickleford by 195 runs.

All could have been so different if crucial dropped catches had been taken, with the visitors’ run machine Matt Baxter being missed twice before he had reached double figures. But he rode his luck and went on to pulverise the Park bowling as he racked up a magnificent 177 not out.

There was no hint of what was to come after 15 overs when Ickleford were 50 for 2 with Gareth Jones having removed both openers before a stand of 130 between Money and Baxter set the tone.

In reply, the Park set off like a train but things changed when Ickleford introduced Matt Marsden (3 for 19).

He removed hard-hitting opener Jono Evetts, who struck a fine 33 out of an opening stand of 48.,

Wickets tumbled as Luke Marsden matched his brother with three wickets, taking 3 for 15.

Meanwhile opener Josh Roseberry, pictured, went on to 52 before he was the last man out caught by that man Baxter on the boundary, denying what would have been a six, as the Park were bowled out for 140. Mo Asif did boost the score a tad with a 34-run cameo in mid-innings.

The Seconds produced their best bowling performance of the year as they overpowered Old Finchelians to complete their third win of the season.

Knebworth won the toss and bowled on what was an overcast but warm day. They welcomed back former junior  pace bowler Max Burrows and, with Niels Hart, they formed a lively attack.

Old Finchelians were unsettled by the pace but were still rattling along at six an over after Hart made an early breakthrough.

Skipper Rob Morley introduced the swing of Archie Stephens, while rotating Burrows and Hart from the top end.

It proved a winning formula as wickets fell regularly and Finchleians were dismissed for 105 in the 34th over.

Stephens bagged 4 for 30 while Burrows and Hart took a brace apiece and Kobie Richmond one wicket.

At the halfway stage Knebworth could sense victory but knew they had to bat sensibly to ensure they got themselves over the line.

Knebworth struggled to score but both openers Danny Digweed and Kobe Richmond played sensibly and took advantage of every single they could.

Unfortunately, Digweed was run out and that brought Burrows to the crease to back up his fine bowling performance. He scored 31 and was looking to up the scoring rate when he was stumped.

That left Morley (13) and Lewis Hutchinson (17 not out) to break the back of the chase before a top-edged pull sealed the victory with ten overs to spare.

On lovely day at Wheathampstead, Knebworth captain James Roos won the toss and decided to have a bat.

Phil Wheeler (27) and Adam Hassall (21) put on 61 for the first wicket and the Park were looking strong.

However when the Wheathampstead skipper brought himself on, wickets tumbled and Knebworth were reduced to 136 all out.

Roos (3-31) took early wickets and with first change bowler Ben Childs taking a wicket with his first ball, Knebworth were looking well in with a chance of winning.

Wheathampstead were 67-5 at drinks but Knebworth dropped four chances and with that went any chance of winning.

David Lightning marked his return to cricket from self imposed retirement to hit a fine 50, playing for the Fourths in the same team as his son and daughter, against St Margaretsbury.

With club chairman and vet Bill Martin hitting 19 in a rare position of opening batsman and Katharine Webb hitting a fine 33, Knebworth ended on 148 for 9.

Webb continued her good work in opening the bowling and taking 2 for 20 but despite of all the other bowlers’ best efforts, the Park were not able to make significant inroads into the visitors’ batting as they cruised home to win by six wickets.