Knebworth Park produced a much-improved performance, albeit in an eight-wicket defeat, away to Harpenden II on Saturday in the Saracens Herts League One.

Mo Asif produced his best innings so far with an excellent 72 and, along with skipper Charlie Randall, was building a strong position.

But the middle order petered away before Guy Warman struck as sparkling 54 to boost the total to 215 all out.

It was only the second time this season that The Park has passed the 200-mark and was a huge improvement after poor performances with the bat in their previous two games.

Opening bowler Joe Gill took the two early wickets and finished with 3 for 46 but it was spinners John Card 3 for 20 and Nick Winchester 3 for 51 who stopped Knebworth not reaching a bigger target.

Despite Knebworth’s left-arm spinner Sonny Iqbal taking 2 for 38 and off spinner Mo Asif bowling ten frugal overs for 0 for 38, the Park couldn’t break the back of the home team’s batting.

Skipper Tom Stewart (106 not out) and Caleb Stewart (64 not out) added an unbeaten stand of 139 for the third wicket to steer them to a comfortable win with 216 for 2.

But the Park could take positives from a much-improved batting display and a determined bowling display. 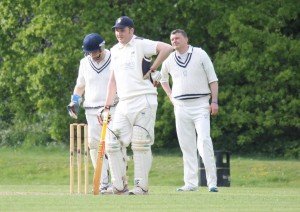 The Seconds pulled off an excellent three-wicket win in a hard-fought contest against Hatfield Hyde in Saracens Herts League Division 4a.

The game that was reduced to 40 overs because the rain did not stop until shortly before the start of play.

Yet, the batting surface was rock hard. Left arm paceman Niels Hart posed problems in taking 1 for 13 in eight overs. Kobie Richmond picked up two wickets but it was medium-pacer Ian Woods, pictured, who did the most damage, claiming four wickets.

The Hyde’s innings relied heavily on an excellent 75 from opening bat Dan Whitton which took them to 165 for 9.

Hyde’s bowlers also made life difficult for the batsmen and at 57 for 4 the game was very much in the balance.

The recovery was led by Ian Pickering (50) and Woods (32) although both fell with the target in sight.

It was left to Hart (10 not out) to push them past the target with an over to spare.

It was just the second league win of the season for any Park team and lifted the Seconds off the bottom of the table.

The Thirds slumped to a heavy defeat at top of the table Harpenden Dolphins on a very wet, unrolled and lively pitch with a very short boundary one side.

But the Harpenden Dolphins total of 187 was always going to be a big ask on the uneven wicket and with a weakened Park batting line-up.The two opening Dolphins bowlers bowled accurately and blew away KPCC with Driscoll taking 7-15 and the Park subsided to 55 all out.

But there was plenty to cheer in a good bowling and fielding display, which included a superb one-handed catch at slip by Richard Jones.