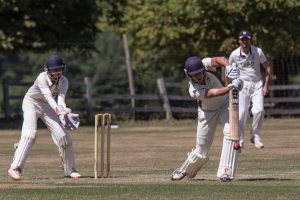 A battling and vastly improved performance by bottom of the table Knebworth Park came close to defeating leaders and near neighbours Preston in Saracens Herts League Division One.

After bowling out the visitors for 161, skipper Charlie Randall, pictured, batted brilliantly in hitting 53 not out and seemed destined to clinch the Park their first win of the season when No11 Graham Fisher was surprisingly given out caught at short leg, causing them to go down by 15 runs.

Knebworth had entered the game without two of their best batsmen and a third, Mo Asif, playing with a fractured wrist.

The Park struck two early blows, with Randall removing Aussie Lewis Balcombe in his first over and Ali Khan finding the edge of James Stevens’ bat.

While Stevens’ brother Jack held the innings together with a fine 67, runs came steadily and, at 101 for 3 with almost 20 overs left, Preston were well placed to build a big total on a surface that, although kept largely dry through the wet week, offered bowlers some assistance.

They then slumped to 136 for 7 as the Park’s slow bowlers turned the screw.

Entering the contest for the first time this season with three slow bowlers, Fisher, with a miserly overs 1 for 27, fellow off spinner Asif (4 for 36) and left arm spinner Khawar Iqbal (1 for 27) did the damage.

A few dropped catches late in the innings allowed the visitors to boost the total to 161 all out, a target that was going to be a tough chase.

The Park’s early batsmen struggled for runs in spite of decent starts by both Jono Evetts (13) and Louis Clayton (15).

A brave 18 from the injured Asif kept hopes alive but, when he fell at 82 for 7, victory seemed out of the question.

Preston bowled accurately and posed problems throughout with James Stevens (3 for 32) and Pete Morrell (3 for 26) being the most successful.

But skipper Randall, with support from the lower order batsmen, took the fight to Preston, mixing sweep shots with powerful drives and, at 136 for 8, the impossible seemed possible.

Then, No 10 Gareth Jones timed an attempted push for one too well and was caught on the boundary.

Randall took 11 off an over from Max Anderson, taking a single to leave Fisher to play the last two balls of the over with the fielders crowded around him.

With the second of these he lunged forward and was adjudged to have got some bat on it and was caught by a diving Jack Morecroft at short leg.

While a desperately disappointing result, The Park could take huge positives from a game which could have gone either way.

The Seconds were derailed by a poor wicket which sent them crashing to defeat at Hatfield and Crusaders.

Put into bat, they started solidly enough and with few alarms until Danny Digweed was needlessly run out. Partner Kobie Richmond soon followed and Kezia Hassall was undone by a ball which ballooned off a length.

The pitch was making the innocuous Hatfield medium-pacers look like world beaters and the Park’s middle order of Ian Pickering, Rob Morley and Ian Woods were all undone by balls which scuttled along the deck from well short of a length.

Nick English clubbed two superb boundaries but it was the last significant resistance.

In reply, Hatfield were made to work for their victory as Neils Hart roared in and ripped out three wickets as well as forcing the opener to retire hurt through a blow to the helmet.

Hart also pulled off a spectacular direct hit run out but there were just not enough runs in the bank to force a victory.

On a damp pitch which proceeded to be an excellent batting surface Knebworth Thirds captain James Roos won the toss and decided to have a bowl.

This looked a good call after taking four early wickets but Northampton Exiles II rebuilt well and managed to post an above par 237-8 despite some very economical bowling figures from Charlotte Banks who had only gone for eight runs in her first six overs.

In reply, Park got away welll with an excellent opening stand of 110 from Phil Wheeler (69) and Darren Hopcraft (36).

But both lost their wickets quickly after drinks and Knebworth were only able to post 143 for 6 in reply.

A good effort from the Thirds against a strong Northampton Exiles side played in excellent spirit throughout.