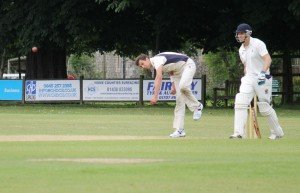 Despite of a five-wicket haul by Knebworth Park’s new captain Charlie Randall, they couldn’t stave off defeat at Langleybury in their opening fixture in Saracens Herts League Division One.

On a soft wicket and a damp outfield, Randall won the toss and elected to field first, hoping to make early inroads into the Langleybury batting line up.

After a few wayward overs, the first breakthrough of the season was made by debutant Ollie O’Brien. A back of a length ball stuck in the wicket and grew big on the batsmen, taking the top edge and was safely caught by Mo Asif at Gully.

Langleybury fought back but the game was evenly poised on what seemed a difficult surface to bat.
Charlie Randall, pictured, brought himself into the attack and make two quick breakthroughs, one being caught at mid-wicket and the next, an over later, trapped LBW.

After a tidy spell by spin twins Mo Asif and left arm orthodox Khawar Iqbal, drinks came, and the match was leaning in favour of the batting side at 106-3 off 25 overs.

The next ten overs brought only 35 runs scored with spin and the introduction of Ali Khan’s controlled pace tying the Langleybury batsmen down. Then came the breakthrough from Iqbal, bowling the opposition’s captain.

Knebworth fought hard and the innings finished on 219-9, with Randall returning figures of 5-45 in nine overs.

The Park knew they had to bat well on a wicket which was drying out slighting but still offered plenty to the bowling side.

After Asif’s second ball was dispatched for six, he fell caught behind.

Josh Roseberry and Adam Sergeant rebuilt but, after a good partnership of 40, Sergeant fell for 27, trapped LBW.
Knebworth never recovered, with Roseberry battling hard for 48 to then be dismissed in the 44th over.

Knebworth were 153 all out, losing by 62 runs. They host Sawbridgeworth next week at home, hoping to bounce back after a difficult start.

New Seconds captain Rob Morley hit a sparkling 50 but that wasn’t enough to prevent a six-wicket defeat at home to Sandridge.

His innings, along with a hard-fought 27 from opening bat Louis Clayton and Mark Woods’ 33, lifted the Park to 180 all out on a rain affected wicket.

Then the visited plunged to 11 for 4 as opening bowlers Ian Woods and Jack Randall each bagged a brace.

Thereafter, Kerry, who had earlier taken 4 for 12, batted superbly for an unbeaten 106 and with Narala 51 they took Sandridge home to victory without further loss in a strand of 173.

The Thirds were whisked out for 56 at Old Cholmeleians and the home side cruised home to victory in the ninth over.losing two wickets in the process to end of 58 for 2.

The Fourths lost a close match against Hitchin 4ths by two wickets.

After managing only 109 for 7, they then had the visitors 79 for 8 but the regular stream of wickets dried up as Hitchin’s two young bowlers guided them home.

Catherine Cirkel was the pick of the Knebworth bowlers taking 4 for 34 including an excellent leg-side catch by under 13 ‘keeper Alex Lightning. Another highlight was a stunning slip catch by Phil Wheeler.

Earlier, a patient 20 from Chris Johnson and 13 on debut by under-13 Luke Mably and a quickfire 18 not out by skipper Jonathan Cirkel boosted the Knebworth total.