A much-improved performance by Knebworth Park saw them go down by 26 runs in a closely contested Saracens League Division One match at home to Sawbridgeworth.

Indeed, they could and should have won after a terrific start to their run chase of the visitors 241 for 7.

After Mo Asif’s brilliant 49 they were 81 off 12 overs but two needless run-outs proved costly as they stumbled to 127 for 5.

Josh Roseberry anchored the innings with 59 and, after his dismissal, Lewis Hutchinson (33) and Khawar Iqbal (19) struck a stream of boundaries which gave The Park faint hope.

But they were dismissed for 215, which still gave them 15 valuable points.

After winning the toss and electing to field, the Park’s Ollie O’Brien made the first breakthrough with the score on 29, taking the edge of Sawbridgeworth’s opening batsmen to be caught by Charlie Randall at first slip.

Sawbridgeworth then rebuilt but at 94-1 the second and third breakthrough came from Randall, both caught at cover by Roseberry.

The game was in the balance; Knebworth were bowling well but boundaries kept coming with the odd loose ball.

Rob Sanders ground out 83 to hold the innings together while good contributions from Hamia Mahmood and Charlie Mann took the total to 241-7 off 50 overs.

There were some good returns on the bowling front from O’Brien, with 1-17 from six overs and Randall 3-31 from his ten.

Knebworth knew they were in the game at the halfway stage, on a good batting wicket and a large outfield. If they applied themselves they should get over the line with ease but stumbled at important moments.

They will look back at a couple of opportunities missed in the field but their batting performance leaves much to improve on heading into next week where they face Old Albanian, another team looking for a first win of the season. 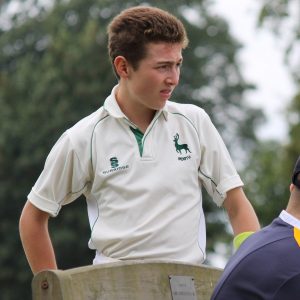 After captain Robert Morley won the toss and put Cheshunt into bat in what looked like an overcast day, opening bowlers Neils Hart and Jack Randall began with great discipline.

Despite not taking a wicket, Hart impressed with figures of 10 overs, 0 wickets for 36 runs.

At the halfway point, Cheshunt were 71 for 4 thanks to excellent fielding from the Knebworth to produce a run out and an impressive 2 for 34 from James Roos in his first game for the Seconds.

Randall returned to the attack to take another wicket but, in spite of frugal bowling by Graham Fisher (0 for 16 in ten overs), it wasn’t until the 41st over before another wicket fell, reducing them to 122 for 6.

Some late hitting by the Cheshunt keeper and No8 meant they finished on a score of 192 for 9.

The Park innings got off to a steady start thanks to Louis Clayton, above, and Bobby Orlandi.

But the innings looked in danger of subsiding when Orlandi fell for 23, quickly followed of Danny Digweed for 1.

As rain looked like it could stop play, No4 Ian Pickering steadied the ship with the impressive Clayton.

After digging in until drinks, they began to play with greater fluency and, despite the soggy outfield, the boundaries started to flow.

It looked at though they were going to finish the job themselves but Pickering was adjudged LBW for 33 with the score on 134.

Mark Woods came in and hit some solid blows before Clayton was deceived when the ball stopped in the wet grass and was run out for a superb 67.

The Thirds were well beaten by Northchurch II.

Adam Hassall and Richard Wheeler top scored with 20 apiece in a total of 125 all out which the visitors swept past without losing a wicket.