Knebworth Park pulled off a dramatic victory to end their season by beating Saracens Herts League Division One champions Old Owens by two wickets to ensure relegation was avoided.

Fortunes fluctuated throughout the game with any one of three results on the cards right up to near the finish.

On a surface awkward for batting, the Park won the toss and chose to field first in an effort to pressure their powerful opponents.

They did exactly that as Owens crumbled from 111 for 4 to 136 all out and then, in a nervous and determined run chase against accurate bowling, the Park squeezed home by two wickets.

The champions’ batsmen had begun their innings in control. At 82 for 1 they were moving forward nicely until Mo Asif (2 for 16) changed matters by removing ex-Stevenage player Shadrach Gittens-Browne for 19 and Chris Palmer for 0 in quick succession.

Thereafter, Chris Whitworth, Owens’ other ex Stevenage player, held the innings together with a superb 68.

At the other end, the last eight batsmen mustered only 12 runs between them as Matt Hutchinson with a brilliant 3 for 28 off ten overs, and fellow spinner Wasim Khalid (1 for 14) tightened the screw before skipper Guy Warman (2 for 17) wrapped up the innings by trapping Whitworth lbw.

The Park set off like a train in reply and they were 50 for 1 in ten overs, Josh Rosebery (29) pasting opening bowler Jack Bloxham for 16 in his first over.

But the innings stuttered when Adam Sergeant (18) was the second wicket to fall, bowled by seamer Andy Sutton (3 for 25), and Roseberry was snapped up at short leg as spinner Carter (2 for 33) applied a stranglehold.

When Ryan Skeggs also went, Knebworth were 69 for 4 and the game was delicately poised.

In a precious stand of 30 with Tariq Umair (19) they took the Park to within sight of victory.

But after Randall was caught behind and David Steadman followed immediately, the pendulum swung Owens’ way at 100 for 6.

With Carter having finished his overs, Whitworth was introduced to the attack and he was blasted for ten in his one solitary over as Matt Hutchinson approached the task with typically positive intent.

Umair’s dismissal was a further setback, heightening the tension at 116 for 7 with 21 still required.

It was then that Wasim Khalid’s handling of paceman Bradley Lane proved crucial, including two superb leg glances in his 12 not out.

Yet when Hutchinson was trapped lbw for 14 with four more still wanted and only two wickets remaining there was still work to do with opening bowlers Lane and Bloxham charging in at both ends.

Skipper Warman and Khalid coolly nudged them home with a flurry of singles to inflict only the third defeat of the season on the runaway champions.

This terrific result confirmed relegation was averted although they could have easily ended high up the table in a season where they lost a string of games by narrow margins.

As it turned out they were comfortably 29 points clear of the drop zone as Chorleywood were well beaten by Harpenden. 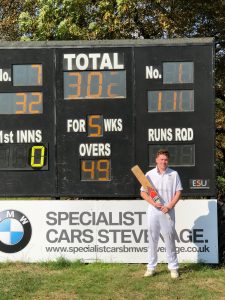 
Ollie O’Brien, pictured, cracked a superb maiden hundred to ensure the Seconds finished their season on a high with victory over Parkfield and Headstone.

The teenager teamed up with 18-year-old Louis Clayton in a double century partnership to rescue his side from a precarious 46-4.

The pair stroked boundaries either side of the wicket as the Park piled on 302-5, their highest total of the season.

The visitors made a good fist of the chase but O’Brien claimed three wickets, including two in two balls, to ensure the total was never seriously threatened.

The Parkfield innings ended 20 runs short, with the last wicket falling off the final ball on what has been an up and down campaign for the Seconds.

Earlier, the Park batsmen were given first use of a belter of a track and skipper Jono Evetts smacked 27 of the first 28 scored, including a magnificent straight-driven six. But his departure prompted a collapse with three further quick wickets.

O’Brien joined Clayton and the teenagers rarely looked troubled as they stopped the rot, rebuilt and then accelerated. The scoring only slowed as O’Brien neared his century and as his partner was adjudged LBW for an excellent 81.

In the pavilion, superstitious dad Wayne was unable to move from his spot until 15-year-old O’Brien finally scampered the runs he needed to complete his first hundred in any form of cricket.

Lewis Hutchinson gave the innings a final boost cracking three sixes in the last over, while O’Brien finished unbeaten on 118.

In reply, Parkfield were aided by some sloppy fielding with several easy chances going down. They looked placed to mount a challenge at 202-2 but were checked by the loss of two quick wickets.

A refreshed O’Brien then returned to the attack to clean bowl three batsmen while Ian Pickering helped mop up the rest of the wickets, finishing with 4-70.

The Thirds finished their season on a high after recovering from a dreadful start to comfortable beat Old Owens II.

After being asked to field, some miserly Park bowling kept Owens tied down. The first wicket came for Jack Randall, ably assisted by a smart catch by Spencer Bayford.

Ben Childs (2-18) picked up two further wickets to restrict Owens to 57-3 at drinks.

When Ian Woods (1-21) picked up the stubborn Owens opener Park began to think of a total under 100.

A recovery though by the Owens lower order began to build up runs.

Wickets continued to fall though with Randall (2-32) picking up his second, Karl Padalia (1-27) claiming the big scalp of the Owens No.5 and it was left to Danny Digweed (4-21) to finish off the tail as Old Owens were dismissed for 149 in the 49th over.

The Park response got off to a terrible start as they slumped to 5-3, the top three batsman all dismissed without scoring.

Tom Hills and Woods led the recovery though as they began to take the game away from Owens.

With the finish line in sight, Pete Bayford (8*) supported Woods (86*) as they saw Park home in the 31st over to win by six wickets

The Fourths was the only team to lose going down by five wickets to Old Owens III.

On a testing batting surface, only John Inman (26) was able to offer sustained resistance in a total of 76.

But the Park’s bowling, a mixture of experience and youth, did well to take five wickets, with Amelia Kemp the pick with 2 for 14.

It ended a much improved season for the Fourths where, under captain Jonathan Cirkel, both experienced players and youngsters, including several girls, have seen their cricket flourish.