Firsts’ fightback in vain on day of batting pain 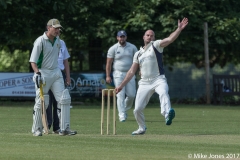 Knebworth Park fought back to come close to pulling off a shock win over promotion favourites Shenley in Saracens Herts League Division One on Saturday.

When The Park had been bowled out for a dismal 130 all out, there seemed little hope, especially as the visitors looked in command at 44 for 1.

Three wickets then fell without a run being scored and soon after another three were also back in the pavilion.

Shenley were 70 for 7, still needing 61 more to win, and the Park scented a possible victory.

That’s when Aussie Kris Nissen, whose bowling had earlier been the chief destroyer, took control with a faultless 38 not out to see them home with wicketkeeper Will Thomson (28 not out).

Sam McCrow, pictured, had led the Park fightback with 3 for 20 and a run out while Matt Hutchinson claimed 2 for 33.

With both having completed their overs Shenley cruised across the finishing line with 131 for 7.

The Park’s recovery provided a significant boost in morale after Shernley’s opening bowlers had dismantled their batting.

Although Mo Asif had fallen early, Adam Sergeant was going well, hoisting a huge six hoisted over the marquee on the deep square leg boundary, but he then fell for 21 to the pace and swing of the giant Nissen

He also dismissed Tariq Umair and Dave Steadman to end up with 3 for 39.

At the other end the slingy action of Akbar also caused problems as he took 2 for 24 and left the Park reeling at 44 for 5. Charlie Randall (31) and Matt Hutchinson (21) took on an aggressive approach that salvaged some respectability.

But from 108 for 6, they then crumbled to 130 all out with the last four wickets falling in quick succession to South African leg spinner Kiel van Vollenhoven who took 4 for 5 in only 2.5 overs.

Sandridge 196 all out, Knebworth Park II 84 all out

The Seconds failed to make the most of bowling first on an indifferent surface at Sandridge.

Niels Hart with 3 for 45 did the early damage, with Graham Fisher picking up 2 for 32.

Herts under-17 pace bowler Jack Forbes-Sobers bagged 4 for 32 on his second team debut .

Skipper Jono Evetts started brightly but, once he was out for 19, wickets tumbled rapidly to leave the Park on 27 for 4.

Alex Richmond fought valiantly before he was last out for 22 as they were skittled for just 84.

Unfortunately, it was the second time this season that many of the players have probably come away from a loss against Hatfield & Crusaders thinking that we should have won the game.

With five players missing from the side this week (three girls were on county duty winning against Dorset), Jonathan Cirkel won the toss and elected to field thinking that with a bit of moisture in the pitch it would be best to bowl first.

The decision looked to have paid off with Alice Baird making a welcome return to Saturday games opening the bowling and soon being rewarded with a wicket as the skipper took a low forward diving catch at square-leg.

At the other end, Bill Martin shook off several years of rustiness in his first couple of overs before bowling with good accuracy but also, like so many bowlers, getting his wicket (LBW) with a full toss.

While the H&C No.2 Asif Ghafoor continued to amass runs through predominantly flat-batted shots, Dave Mantle had replaced Alice after six tidy overs and soon struck to take a couple of wickets taking the score to 68-4.

It looked like Knebworth would clean up the opposition innings quite quickly.

Unfortunately, Faraday and Oram for H&C had other ideas and the Park’s bowlers failed to find a way to get them out.

Neither batsmen was particularly stylish but neither gave chances and, despite Knebworth’s bowlers not bowling badly, things just did not go their way.

The two batsmen built a very solid partnership and with the boundaries perhaps not being as well protected as they should have been and too many singles being turned into easy twos or twos into threes, the pair put on a 113 partnership.

Cirkel (7-0-26-1) having taken himself off from one end returned after Eddie Large, having only his second bowl of the season in the Fourths, tried to coax out the batsmen.

The partnership was finally broken by Izzy Cloke with an excellent bit of keeping as she stumped Oram for 54 from a wide from the returning Baird.

To have any chance of winning the game, Knebworth needed a good start.

Unfortunately, this didn’t happen with Phil Wheeler, normally a good judge of the leave left one outside off stump which the wind pulled back to bowl him.

Chris Johnson, joined by debutant Mo Mubarak, did his job of protecting one end and seeing off the opening bowlers while Mo tried to hit some lusty blows before falling LBW for 11 (26-2).

Simon Roos, building in confidence with defending his wicket (despite a painful blow on the arm from a beamer), stayed with Johnson through to drinks.

Unfortunately, neither batsman found it easy to keep the score moving at the pace required and when Roos (5) was out soon after drinks, the score had only moved to 48.

Izzy Cloke tried her best to accelerate but was out to a good catch for four and then Cirkel, deciding his normal aggressive batting was needed, quickly got off the mark with a boundary followed by another.

Richard Wheeler joined Cirkel when Chris (29) was finally caught in the 28th over and tried his best to get the rapid runs required to get the run-rate anywhere near achievable but missed a straightish one to be bowled for six.

A mix-up between Baird and Cirkel ended in a run out and although Cirkel plundered a few more runs to take him to 21 he was soon also back to the pavilion with an inside edge hitting right pad, bouncing of left knee and then rolling into the very bottom of the off-stump and just dislodging the bail.

The innings quickly closed despite Martin (13) hitting a couple of nice shots for boundaries and Large steering one through to third-man for four before Mantle was bowled.  Knebworth finished on 103 all out.