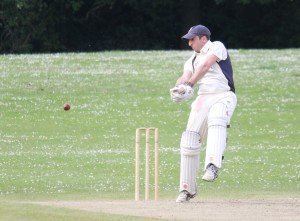 Knebworth Park blew a bright start to their Division One match at Shenley to slump to a poor total that the home side passed comfortably for the loss of only three wickets.

Mo Asif was in dominant mood before he was caught behind in only the seventh over for 25.

Fellow openerJosh Roseberry continued the good work in taking the total on towards 70 for 2 but, thereafter, only Tariq Ali (24) and Matt Hutchinson (22) reached double figures as wickets fell at regular intervals as the Park ended on 131 all out.

Sam McCrow (2 for 20) lifted the Park’s hopes but Matt Evans who was bowled by Mo Ali for 45 just before the end and Kris Nissen (45 not out) guided the home side home to victory in 32 overs.

With the fielders having closed in on Fisher he scampered a sharp single off the penultimate ball to bring the scores level and then Painter crashed a boundary over extra cover for victory.

Park skipper Jono Evetts won his first toss of the season and, with the early cloudy conditions and the weather due to get better, he had no choice but to stick Sandridge in to bat.

The usual opening pair of Gareth Jones and Ollie O’Brien bowled well with the new ball but with not much luck.

Dropped chances early on saw Sandridge race to 50 without loss after the first 10 overs.

It was the introduction of Archie Stephens that brought about the breakthrough, trapping the left-handed opener plumb in front and following up in his next over removing the second opener.

This brought the Sandridge skipper to the crease who looked solid with the bat, helping them to 120 for 2 at the 25-over mark.

The fightback began with some fine second spell bowling from Niels Hart, who finished with 4-47.

He was backed up with some excellent fielding, including two extraordinary catches by Karl Padalia and Tom Liversidge, as Sandridge were all out on the last ball of the innings for 215.

A good opening stand from Rob Morley and Liversidge saw Knebworth reach 45 after their first 10 overs.

Unfortunately, wickets fell again at regular intervals and the Park again put pressure on themselves during the chase.

Lewis Hutchinson and Jones came together at 93-5 and formed a solid partnership, taking the score to 134 before Hutchinson was removed for a patient 15.

Jones continued to bat well and was getting Knebworth within sight of victory, playing some great shots and finally living up to all his pre-season talk about his batting.

With the game slipping away from Sandridge, the wicketkeeper removed his pads to take the ball and removed Jones.

The game continued to swing back and forth with Knebworth losing their ninth wicket with 206 on the board and only three overs remaining.

With Painter and Fisher at the crease, they managed to guide Knebworth to within four runs of victory in the final over.

Two quick singles were taken by each batsman leaving the Park needing two off the final four balls.

Fisher blocked two balls and then took a calculated single leaving Painter on strike and only one required off the final delivery.

Painter turned to the opposition keeper explaining that he only came for a sun tan, before elegantly stroking the ball over the infield for four sending the crowd into a frenzy and taking Knebworth to a one-wicket victory.

A superb century by skipper Ian Woods ensured that league leaders Old Camdenians had to fight all the way for a victory against the Thirds.

Things looked glum for the Park as the visitors powered to 192 for the loss of a single wicket as their two best batsmen built a superb stand.

But when Dave Barwick held a steepling catch on the boundary, the Park bowlers launched a superb fightback.

The rest of the OC batting looked fragile, scraping together only another 50 or so runs in the final 15 overs.

Three sharp run outs showed that the Park fielders had kept up their concentration levels in the sapping conditions.

Ben Childs also claimed three wickets as he helped haul the Thirds back into the match.

Two early wickets meant the Park were in trouble before skipper Woods and Ian Pickering rebuilt patiently. They were heading towards a century stand when Pickering (33) clothed a dreadful long hop to mid-wicket.

Woods, however, battled on, striking some clean pulls and drives, supported by Nick English and Childs.

With only ten men, Woods shepherded the lower order to ensure the Park would gain as many batting points as possible. He was eighth man out for a superb 103 ensuring his side, even in defeat, maintained their bright start to the season.

The Park’s 4s were hosted by a friendly bunch at Hatfield & Crusaders, who were only playing their second game of the season following Baldock’s concession and a rained-off game against Old Owens.

The result of the match might have been different if at home on a flat pitch as our batting strength should have been better than the hosts’.However, what can only be described as an incredibly poor unrolled pitch, KPCC were asked to bat first and although not many of the wickets can be put down purely to the state of the wicket, it certainly made any batting with proper shots, difficult.

The Park’s innings did not start well with James Roos being bowled for 3 and was followed shortly afterwards by Phil Wheeler LBW for a duck.

John Inman started a very patient recovery for the innings and, with the H&C captain taking the first of his two excellent catches, Richard Wheeler departed for 10.

Jonathan Cirkel came to the crease and soon received two balls which bounced over head height demonstrating the difficulties of batting.

However, if the ball was there to be hit, Jonathan hit it and moved quite quickly to 18 before giving the freshly moved mid-off a catch.

Dean Digweed departed quickly which brought Amelia Kemp to the crease and in her innings of 12 hit a couple of excellent shots with none better than the one caught and bowled by the H&C captain.

Catherine Cirkel made a welcome return to cricket falling for 9 off a questionably high full toss. The innings closed on just 85 from 30 overs with the fall of Dave Mantle for a duck leaving Eddie Large at the crease on 0.

Hatfield’s innings started steadily against the opening pair of Roos and Kemp, who both bowled tightly.

Roos made the breakthrough in the 9th over, finishing with 1-15 from his eight overs. Kemp was unlucky not to pick up a wicket as she reeled off five steady overs for just nine runs.

She was replaced by Mantle who was his usual accurate self, collecting 2-21 in his eight overs.

But with so few runs on the board and wickets not falling regularly enough, Hatfield batted themselves into a winning position eventually in the 29th over.