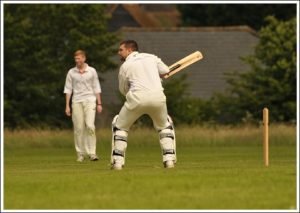 On day when nearly all other matches were washed out, Knebworth Park and Hitchin Fourths played through the rain to culminate in a thrilling finish where the visitors won by just one run.

The Park were out of the contest at 81 for 9 in chasing the visitors 117 all out before Ben Childs, pictured, plundered a belligerent 26 not out supported by number 11 Eddie Large who was then clean bowled with two runs required.

Earlier when Hitchin batted, Childs (2 for 14) and debutant James Roos (1 for 29) put the Park on top and then Dave Mantle, aided by a superb catch from Dean Digweed, took 3 for 21 to make further inroads.

Fourteen-year-old Amelia Kemp, a rising star in Hertfordshire County U15s as well as the Eastern Region Academy bowled with excellent pace and accuracy and was unlucky not to bag a wicket in her four-over spell which went for only 13.

Jonathan Cirkel (3 for 27) and John Inman (1 for 7) continued to restrict Hitchin who were eventually out for 117 from 38 overs.

Knebworth’s reply didn’t start too well with Phil Wheeler being caught by the keeper with the score on 10 but then, with Cirkel at the crease, the debutant day of James Roos continued positively as he struck the bad ball well and impressed with his driving through the off-side as he made a valuable 31.

It was nice to see Hitchin open from one end with Sophie Gates, an ex-Hertfordshire age-group player. From a positive start, Roos fell at 48, and then Cirkel (14) at 55. Digweed chipped in with some lusty blows in a 13-run cameo, but with further wickets falling regularly the Park were going to need something exceptional to stand any hope of winning the game as they looked doomed to lose by a convincing margin.

But, up stepped Childs, who smashed several boundaries in his determined and aggressive knock of 26 not out until the resolute defence of last man partner Large was breached to end a terrific game in the rain.