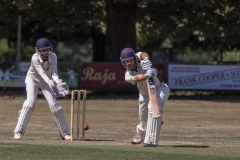 A brilliant innings of 67 from Charlie Randall almost hauled Knebworth Park back into a chance of winning their opening match of the season in the Saracens Herts League Division One against Broxbourne.

In the end they went down by 46 runs. His innings took them from a precarious 77 for 4 to 175 for 7 before he and skipper Guy Warman (16) fell in quick succession as the side was  bowled out for 178 in chasing the visitors 224 all out.

Randall who struck six sixes was supported in the middle order by Ryan Skeggs (23) and new player Cherry Tariq (36). They were not helped by the early batsmen failing to provide an early base with opener Mo Asif looking impressive before he was run out.

The Park bowling also under-performed. While Sam McCrow conceded just seven runs in taking 2 for 7 in eight overs and Matt Hutchinson 2 for 28 in 10 overs as a whole they failed to back them up with equally tight bowling and fielding, although Randall, pictured, did bag a handy 3 for 44.

The Seconds opened up their league season away to North Mymms II, hoping to put the woes of the previous seasons relegation behind them and get off to a winning start.

North Mymms won the toss and stuck Knebworth in the field on a what looked like a fantastic batting track that was only going to get better as the day went on.

Knebworth got off to a good start with Gareth Jones taking an early wicket.

North Mymms rallied and built a partnership which was then broken with the introduction of Graham Fisher who finished with figures of 1-28 after his 10 overs.

It was Jones who returned the best figures of 4-14 which allowed Knebworth to bowl out the opposition for 187 in the final over.

There were very few contributions with the bat during the Knebworth innings with only Rob Morley (23), Archie Stevens (23) and Jono Evetts (34), making any impact.

Unfortunately with wickets falling at regular intervals and no real partnerships being formed, Knebworth collapsed to 119 all out, losing by 68 runs.

The Thirds fell to a narrow defeat in their opening game of the season against newly promoted Potters Bar 3s.

The Park started their response full of confidence with under-14 Spencer Bayford making a breezy 18 to get Park off to a good start.

A flurry of top order wickets though put Park in trouble as they fell to 41-4.

Pete Bayford (18) and Nick English (23) sparked the Park fightback however when both were dismissed in consecutive overs, Park were still a way off their target at 94-6.

Kulkarni continued their good work though putting away any loose bowling and Park began to see the total in their sights.

An unfortunate mix-up led to the run out of Kulkarni (32) with 26 still needed to win and Park were unable to see themselves over the line as they were dismissed soon after for 153, 22 runs short of their target.

An excellent display in the field and some promising individual displays with the bat left Park optimistic that despite the defeat, they could greatly improve on their relegation battle of the year before.

The Fourths started their season with a loss against Hoddesdon IV on the picturesque Roydon ground.

Winning the toss and choosing to bat on a flat deck, Knebworth got off to a good start with openers Phil Wheeler and debutant Danny Godfrey both contributing 17 as the score reached 47-0, but wickets fell quickly from there.

An aggressive knock of 35 from Ben Childs was the only major contribution as the Park struggled to 129-8 off the 40 overs, helped in the cause by a large number of extras.

But the main threat to Hoddesdon’s victory was their own suicidal running – a single run out could have been joined by several more.

The home side cantered home with 17 overs to spare and seven wickets in hand.

Some positives for the Park with some good individual performances but a more complete team performance will be needed next week.