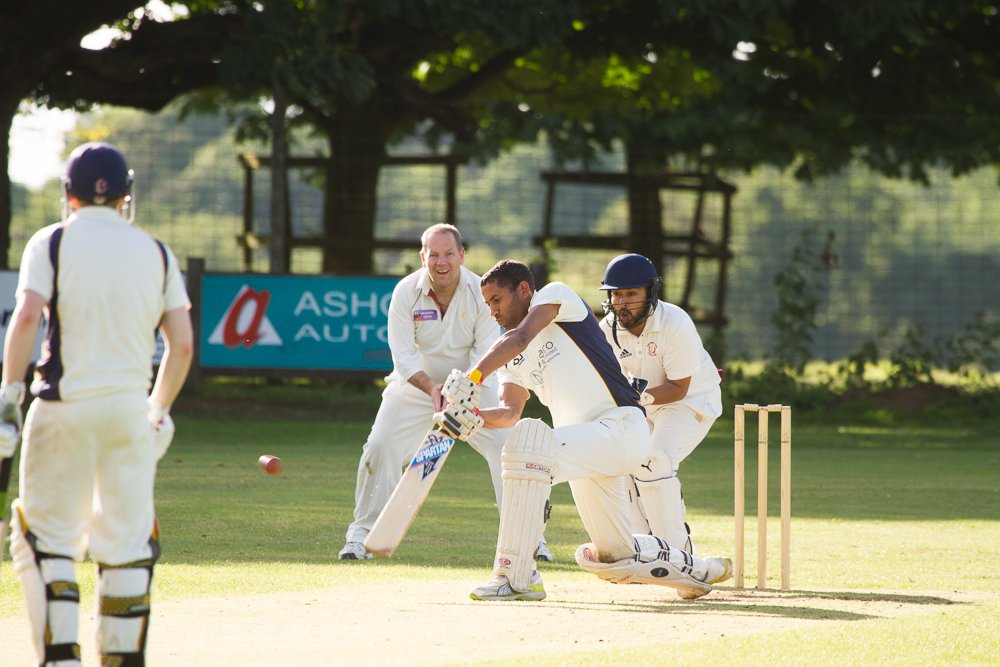 Skipper Guy Warman took a hat-trick to help inspire second-placed Knebworth to a comfortable win against near-neighbours Preston on Saturday.

The victory earned 30 points and, with league leaders Ickleford’s game at Hitchin washed out, narrowed the gap at the top of the table to three points.

Remarkably, as the storm clouds loomed and just a mile away there was a monsoon-like downpour, the Park were under way with just the shortest of delays.

Bowling first, Knebworth started slowly as Preston reached 60-0 off 15 overs, before the introduction of Charlie Randall (3-29) rattled the top order.

In response, opening pair Josh Roseberry (10) and Rana Arslan (25) got the Park off to a rapid start before both fell with the score on 39.

A sparkling season’s best 41 not out from Ryan Skeggs and Jarrod Turner (31) steadied the ship and calmed the nerves to take the total to 105 before Turner departed. Skeggs, pictured above, remained in control to guide KPCC smoothly to a six-wicket victory.

Next up this Saturday for the Park is the top-of-the-table game away to leaders Ickleford as, with four games remaining, there’s all to play for between the top three sides.

The Thirds secured their second win of the season to boost their hopes of avoiding relegation, thanks to a strong bowling performance and a composed batting chase.

Stand-in captain Bobby Orlandi won the toss after a rain-affected morning and had no hesitation in putting Old Owens in to bat.

Ben Childs, who took 3 for 32 from his 15 overs, bowled with pace and swing which was too much for the top order, backed up ably by the ever-reliable Mark Taylor.

But the pick of the bowlers was under-14 Dan Roomans, who bowled with superb pace and accuracy to claim 3-30.

With Old Owens seemingly reversing their batting order, however, Park would see a commanding position of 69-6 become 201-9 after some meaty lower order hitting.

In reply, Tom Hills and Danny Digweed batted superbly, taking the score to 60 before Digweed fell for 14.

Ian Pickering batted alongside Hills with typical grit to make 66 from 81 balls and take the game completely away from Old Owens.

After Hills eventually fell for a fantastic 60, skipper Orlandi went cheaply to set the stage for Nick English. His quickfire 30 included a huge six over mid-on which came as he and Pickering clubbed 20 in four balls.

After both perished in the run chase before a large throng of cheering club members, it was left to Scott Page and Lewis Hutchinson to seal the win, each striking a four to seal the game.

Park now sit 15 points behind Southgate Adelaide who they play next.

It was, without doubt, the Thirds’ best batting and team performance this year.