Eight more for Randall as Park return to winning ways 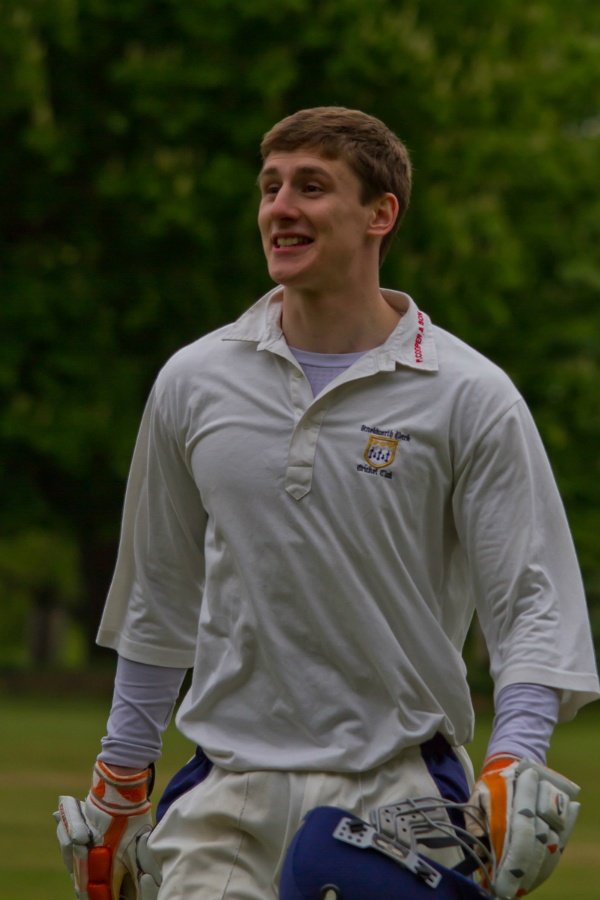 Left arm quick Charlie Randall bettered his seven-wicket heroics at St. Albans only a few weeks ago with eight against Watford Town in the 11th league game of the season to take them up to second place in the league table in Saracens Herts League Division 2a.

Both pitch and outfield looked stressed after one of the driest summers in recent memory leading to skipper Guy Warman asking the home team to attempt to put willow upon leather.

This task seemed to be a tall one as soon as Randall wrapped his fingers around the cherry.

He proceeded to bowl full, straight and swinging deliveries that had the Watford batsmen all at sea as the drizzle started to fall.

Randall finished with figures of 8-29 off his 14 overs and picked up an incredible six LBWs with the other two coming from very good catches from Josh Roseberry and Warman.

The captain himself claimed the other two Watford wickets to restrict the home side to a below par 73.

The reply started in positive fashion with the slightly revamped batting order looking to knock off the seemingly lacklustre total without fuss.

Rana Arslan (15) and Roseberry (9) took the team to 24 without loss before the Park’s regular batting wobble struck again.

Aided by an increasingly dodgy wicket and some questionable decisions, 24-0 became 50-5, but then, of course, Randall (12*) strode to the crease and calmed any potential nerves and along with Jack Orchard (6*) saw the team home with four wickets in hand and secured the valuable 30 points.

The Park now find themselves in second place three points behind new league leaders Ickleford with seven games remaining. Plenty of hard work still lies ahead if promotion potential is to become a reality.

A brilliant solo effort of 111 not out by Seconds opening bat Haydon Bartlett-Tasker, pictured, was one of the performances of the season.

He carried his bat with a masterly innings in a total of only 141 all out as they went down by 93 runs to Hertford who rattled up a testing 234 for 6 as Knebworth lost their first game for five weeks.

He dismissed all the bowling to every corner of the ground, while in contrast only one other player, Mark Winchester, with 18, even reached double figures.

A much improved performance with the bat earned the 3s a credible draw against Weston as they picked up 17 vital points in their battle to avoid relegation.

After being asked to field, captai  Ian Woods utilised the many bowling options at his disposal

However, despite bowling well, only pick of the bowlers Ollie O’Brien (2-26) was able to make any breakthrough as Weston reached 67-2 after 21 overs.

This brought the Weston skipper Will Pugh to the crease and, along with their opener, he began to build the innings as they put on 66 before a stumping by keeper Jono Evetts from the bowling of Harvey Turner (1-43) gave Park their third wicket.

After receiving a reprieve after a dropped catch when only on 18, Pugh began to take the innings away from Park with some big hitting to take the score to 198 before Ben Childs picked up the fourth wicket.

Danny Digweed and Dylan Van Der Westhuizen got the Park response off to a good start as they reached 50 before Digweed was dismissed for 33 in the 13th over.

Woods fell soon after but under-14 team mates O’Brien and Van Der Westhuizen batted well to build Park a platform to enable them to reach the Weston score.

As the run rate creeped up though, risks had to be taken and when O’Brien (24) was dismissed in the 33rd over with the score on 116, Park needed over 100 with just 14 overs left.

This brought Jono Evetts to the crease and along with Van Der Westhuizen who had passed 50, began to bring Park back into the game with some big hitting.

The pair put on 66 in 9 overs before Evetts was dismissed for an excellent 44 from just 26 balls.

This left Park needing 50 in 5 overs but, with plenty of wickets in hand, they could make an assault on the high run rate

However, a flurry of wickets, including Van Der Westhuizen (75), left the Park changing their target to just reach 200 to ensure maximum batting points.

This was completed in the 46th over and it was left to Harvey Turner to see out the final over, Park finishing on 204-8.

The fourth team narrowly failed to clinch a second league win as they went down by just one wicket away to Boxmoor II as the last few batsmen led a remarkable recovery to cause a big turn-around in the game.

Skipper Robert Crowe’s 6 for 43, including a hat-trick, had put the Park in as strong position, but none of the other bowlers could threaten sufficiently and the tail was able to wag strongly and squeeze home.