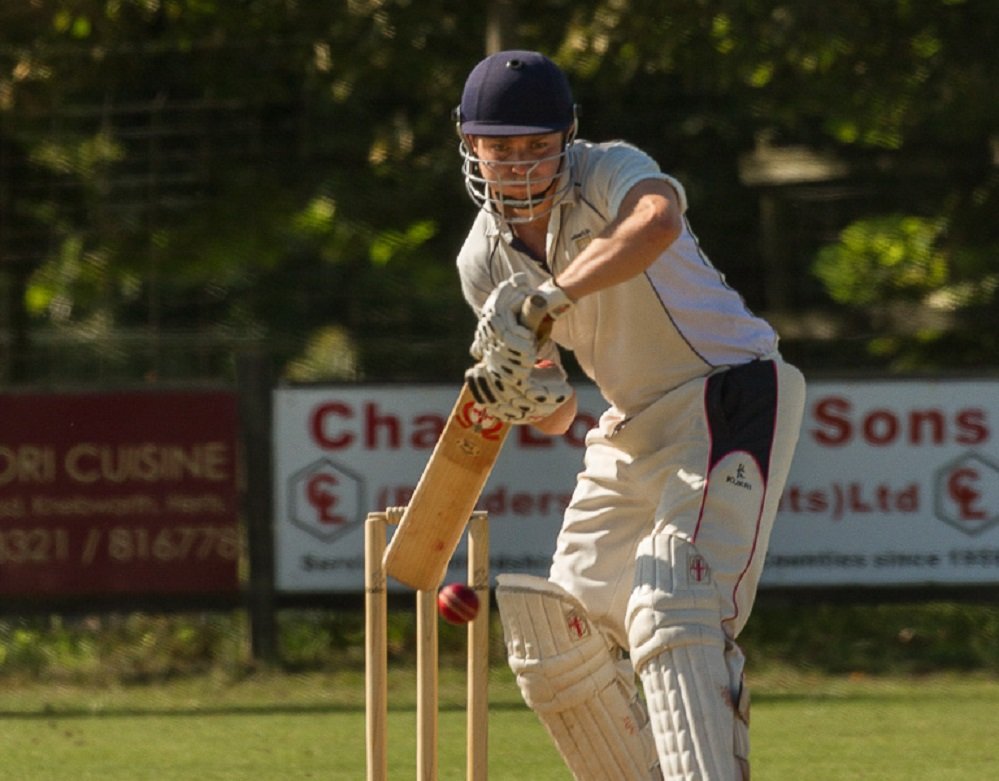 KPCC 113 all out, Bishop’s Stortford II 116-6
Knebworth’s fragile batting reared its ugly head yet again in their top of the table clash with Bishop’s Stortford II that spelt a four-wicket defeat which tumbled them to third place.
Batting first Knebworth were immediately on the back foot versus some steady if not spectacular bowling particularly from opener Smith (15-6-20-4).
Having struggled to 33-2 off the first 15 overs the middle order continued to be lacklustre and limped to 113 all out with only Charlie Randall (27) and Jack Orchard (17*) showing any ability to stay at the crease.
Defending another sub-par total Parks’s bowlers tried their hearts out and put the Stortford batsmen on the back foot with Sam McCrow (8-3-17-1) and Guy Warman (12-3-27-3) taking them to a position of strength at 57-4 then spinner Matt Hutchinson (9-2-30-2) took a further couple of wickets to reduce Stortford to 65-6.
Unfortunately for the Park former player Alex Portas (58*) batted very sensibly along with number 8 to guide Stortford to a four wicket win.

Old Finchleians 104 all out, KPCC II 108-8
An amazing captain’s innings by Gareth Jones, pictured, led the Seconds to a dramatic second successive win by two wickets over Old Finchelians.
His unbeaten 35 off only 32 balls and Tom Elliott’s 14 not out hauled them back from a seemingly hapless 54 for 8 to a winning 108 for 8.
They were chasing a paltry 104 all out thanks to Graham Fisher’s destructive 5 for 21 coupled with the bowling of the batting heroes, Jones taking 3 for 47 and Elliot 1 for 8.
It was a win that cut the deficit from the relegation drop zone by 15 points to 35 and achieved back to back wins for the first time for two seasons.

Tewin 238-3, KPCC III 55 all out
The Thirds suffered an embarrassing defeat at the hands of table-topping Tewin.
After being asked to field, the Park managed to keep the scoring rate down but found wickets hard to come by as several chances came and went before a late flourish saw Tewin declare in the 51st over with the score 238-3.
There were wickets for Mark Taylor (1-33), Ian Pickering (1-58) and Bret Painter (1-35).
It was a disappointing response with the bat as Park were bowled out for a lowly 55. Pete Bayford (18) and Scott Page (12*) were the only batsman to hit double figures.