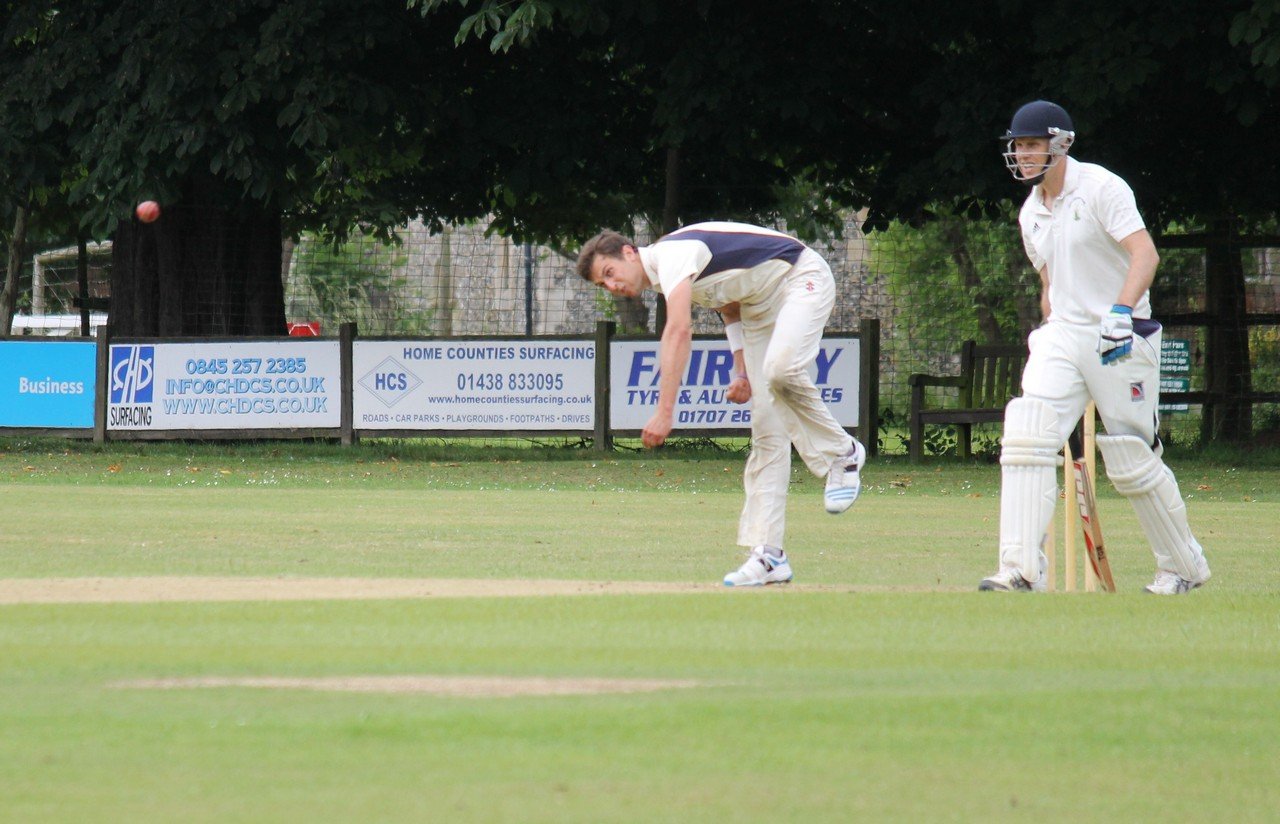 Charlie Randall, above, produced a superb spell of bowling to decimate the St Albans batting line-up and maintain Knebworth Park’s lead at the top of the table in Saracens Herts League Division 2a.

Having chosen to bowl on a green-tinged wicket, Randall (14-2-31-7) decided it was time to reproduce his form of old with a spell of pace and swing which was far too much for seven of the top eight batsmen

Sam McCrow bowled without luck or a wicket at the other end, before skipper Guy Warman (10.3-2-29-3) mopped up the tail with minimal resistance to bundle out St Albans for a meagre 72.

The chase, unlike the stereotypical Park effort, looked calm and controlled as openers Josh Rosebery (29 not out) and Jarrod Turner (22) took the total to 53 before Turner fell to a lazy shot.

Adam Sergeant (14 not out) joined Roseberry to knock off the remaining runs with ease within 20 overs.

At the half-way stage of the season and with seven wins from nine, the Park sit top the table but only by three points from Bishop’s Stortford who they play at home on Saturday.

In their bottom of the table clash with Met Police, it was now or never for the Seconds.

Skipper Gareth Jones won the toss and made the bold decision to bowl in a format where points heavily favour the team batting first.

Opening the attack, Jones and Geoff Bagshaw bowled well but without luck, restricting the scoring of the Met openers but failing to get the crucial breakthroughs.

It wasn’t until they turned to spin that they began to take wickets.

Graham Fisher (2-27) off his 15 overs was back to his irreverent best, supported by Alex Richmond (3-58) who bowled very well despite some decidedly average fielding of his bowling with the simplest catches going down.

The part time off-spin of a returning Haydon Bartlett-Tasker at the death saw them restrict the visitors to 199-8 of their 53 overs.

Bartlett-Tasker (90) got the Park off to a rip-roaring start with the Police electing to go with some questionable slow bowling.

He played with great composure and maturity to power them into a winning position before eventually falling to yet another moon ball.

Richard Winchester did what he does best at the other end, digging in for a chanceless 81* in which he never once looked like getting out.

He has now batted for over 100 overs straight without giving up his wicket, a phenomenal achievement.

An important 24 from Adrian Holmes help guide them to their first victory in two years and it was down to Tom Liversidge (4*) to strike the winning runs.

A great and overdue victory for the Seconds who have now not lost in three weeks and aim to build on this new-found form.

The Thirds were unable to build on last week’s win as they succumbed to a narrow defeat at Bushey.

Despite all four of the top order getting starts after being asked to bat, no one was able to kick on as the side slumped to 69-4, 22 of those coming from incoming Queenslander Jack Hay who made a promising start to his time in England.

Wickets continued to fall but a 25-run partnership between Harvey Turner (8) and Ben Childs (23) took Park past the 100 mark before they were finally dismissed for 117 in the 35th over.

What looked like a very low score began to look very high for Bushey as Ian Woods picked up two wickets within the first three balls of the Bushey innings.

Two further wickets for Woods (4-54) left Bushey in trouble at 27-4 but some big hitting, sloppy fielding and missed chances then let Bushey back in to the game as they put on 40 for the fifth wicket before the returning Ben Childs made the breakthrough.

With the score on 67-5 the game was evenly poised and when Turner dismissed the Bushey No.6, Park began to sniff victory.

With Childs (3-17) picking up wickets seven and eight with 15 still needed, the win was on but it sadly wasn’t to be as Bushey picked up the final runs to leave Park with just the one win from the first half of the season.

It was a game of ‘what ifs?’ for the Park as 20 more runs with the bat or taking some of the chances they were given would have likely sealed the win.

The Fourths were brought back down to earth on Saturday, suffering a nine-wicket defeat to Ickleford III at home.

The father and son combination of Pete Bayford (32) and 13-year-old Spencer (26*) were able to bring some respectability to the total, closing on 125-9.

An early wicket for Rob Crowe (1-35) proved to be a false dawn as the visitors swept to their target with no further wickets falling.