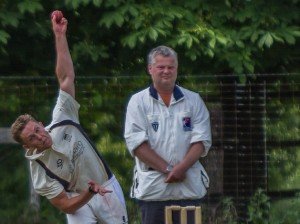 Knebworth Park secured another thrilling victory to stay top of division 2A.

Playing against local rivals Hitchin on an overcast day, skipper Guy Warman lost the toss and then promptly injured his back trying to move a sightscreen.

Hitchin decided to bat first knowing that if they could set more than 150 then they were in with a shout of defending against the Park’s fragile batting lineup.

Park openers Turner (40) and Josh Roseberry (40) started the response in a very calm and responsible fashion punishing the bad balls and keeping out the good ones.

At 73-0 everything looked to be progressing towards a comfortable victory but, as everyone has witnessed this year, the batting line-up is prone to collapse.

This proved to be the case again as 73-0 quickly turned into 132-7 with all the middle order, barring Robinson (24), being removed cheaply.

With the pressure increasing, only a few wickets left and now a run rate to contend with in order to chase down the total Charlie Randall (29*) produced an innings of great class and composure in order to take it down to the wire.

Supported well by the crippled Warman (11) it came down to ten off the last over in order to win.

Now at the crease having not faced a ball, Courtney slog swept the first ball of the over for four to relieve some pressure.

After a few scamped runs it came down to three needed off the last ball.

Randall smashed the ball over the rope for six to claim another nail-biting win for a team that refuses to lose.

Now with six wins from eight the Park sit top of the table and will be looking to continue this fine form to remain there come the end of the season.

The home side won the toss and batted  But, by the third over, they had been reduced to 5 for 2, both wickets falling to Gareth Jones.

Shortly afterwards, he picked up his third, reducing Letchworth to 22 for 3.

At the fall of the third wicket, Albon joined captain Matthew Bridge who steadied the innings before Bridge fell to Alex Richmond for the second top score of the innings of 26.

The fifth wicket did not fall until David Albon had passed his century and he continued to strike the ball to all parts of the ground in reaching 155 not out in the 35 overs he was at the crease.

Knebworth’s  response began with an opening partnership of 59 between Adrian Holmes (36) and Richard Winchester who batted throughout the innings for 69 not out.

At no time did Knebworth approach the required run rate and the game drifted to a draw reaching 171 for 6.

The Thirds’ youngsters starred as the side picked up their first win of the season.

After electing to bat, park got off to a good  start until Danny Digweed was removed in the fifth over with the score on 27.

Skipper Ian Woods and 14-year-old Dylan van der Westhuizen kept the runs flowing as they pushed the score along to 72 before Woods (13) was dismissed.

Van der Westhuizen would go on to make an excellent 59 but, with wickets falling regularly, Scott Page made what turned out to be a valuable 14  as Park scrambled to 154 as they were dismissed in the 36th over.

With a low but competitive score on the board, another 14-year-old, Jack Randall, picked up two early wickets to put the pressure on Old Cholmelians as they fell to 7-2.

Randall was ably assisted for the second wicket by Harvey Turner who took a stunning catch coming in off the boundary.

A further wicket for Randall, one for Turner and two for Woods had Old Cholmelians in deep trouble at 46-6 but some sensible batting then brought them back into the match and Park doubts began to creep in.

A smart catch from van der Westhuizen off Karl Padalia (1-30) picked up the vital seventh wicket, with the visitors on 92 and still needing more than 60 runs to win.

Van der Westhuizen continued to be heavily involved in the game as a good throw from the boundary lead to a run out for the eighth wicket.

The returning Randall (4-19) then picked up the ninth and it was left to skipper Woods (3-23) to take the final wicket as Cholmelians were dismissed for 108 to give the Thirds a vital win in this bottom of the table clash.

A superb bowling performance from skipper Robert Crowe propelled the Fourths to a welcome victory away at Aldenham.

The left-armer claimed eight wickets as the home side were shot out for 141.

Despite a flurry of wickets, Pete Bayford (68 not out) and John Inman (47) shared 90 for the fifth wicket as the Park moved towards the 200 mark.

With contributions from the tail, Bayford was able to push the total to 232 at the close.

The Aldenham reply began relatively well, with the home side reaching 40 for the loss of one wicket.

However opening bowler Crowe struck twice in two balls, beginning a procession of wickets as the Park pushed for victory.

With Dean Digweed taking three catches in the gully, Crowe dismantled the middle and lower order, ending with 8-38 off his 15 overs.

The day was completed when Sharma took a sensational one-handed running catch off Catherine Cirkel to secure a 91-run victory.