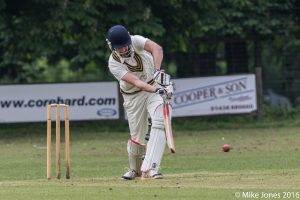 A brilliant whirlwind 103 not out from Adam Sergeant powered Knebworth Park to an easy eight-wicket win over Radlett II to keep them joint top of Saracens Herts League Division 2a.

After the Park’s bowlers dismissed the visitors for only 138 in 44 overs, Sergeant then took control in taking only 28 overs to reach the target.

This was their fourth game of the 2017 season and the fourth toss skipper Guy Warman had lost.

Radlett, despite some early morning rain and humid conditions elected to bat first which didn’t prove to be a very fruitful decision.

Charlie Randall (2-16) removed both openers cheaply and was well supported by Sam McCrow in restricting Radlett.

Then, Warman (3-28) introduced himself and Ross Courtney to the attack which again proved successful, the skipper grabbing three quick wickets and Courtney keeping the scoring to a minimum at the other end.

Some resistance from Radlett batsmen Jones (41) and Alishah (27) proved frustrating for the Park but Warman brought on Matt Hutchinson who curtailed the Radlett resistance with 3-29.

In the absence of Josh Roseberry and Ryan Skeggs to open, deputies Rob Morley and Shaun Robinson stood in and, for the second time in two weeks, Morley fell cheaply.

Robinson, after spending two weekends in the Fourths sharpening his skills, departed soon after for 13.

That brought together Sergeant, pictured above, and Charlie Randall (11 not out) and from then on it was complete Sergeant dominance.

Randall nicked the singles to leave Sergeant playing with complete freedom and aggression against the Radlett bowlers.

His hundred came up off just 86 balls and was a superb, chanceless innings to follow his half-century the previous weekend.

The Park’s comfortable win sees them still sitting pretty at the top of the table along with Ickleford.

They will hope to maintain the momentum when they travel to Preston next weekend.
KPCC II 205-8, Redbourn 206-4

The Seconds put up a heartening performance in losing by six wickets to league leaders Redbourn.

Having won the toss, the Park chose to bat first.

After losing Danny Digweed early fellow opener Adrian Holmes (47) and No.3 Louis Clayton (93) made batting look easy piling on the runs leaving Park 132-1 around the 30 over mark.

Unfortunately, after the loss of Holmes to an LBW decision Clayton soon followed, his brilliant knock, full of classy drives and powerful pulls, coming to an end just shy of a deserved century.

Only Ian Pickering (30) was able to make a meaningful contribution and they limped to 205-8, a below par score from what was a brilliant foundation.

The Redbourn openers came out aggressively and put on the pressure from the off and while Archie Stephens (1 for 35) bowled well with control, runs were being scored freely at the other end.

It wasn’t until Graham Fisher (2-45) got a breakthrough that they exerted some control.

With Pickering also grabbing a wicket, they had Redbourn four down with more than 100 runs still required, giving them a sniff but Redbourn recovered well for a comfortable six-wicket victory.