Firsts dig deep to get away to a winning start 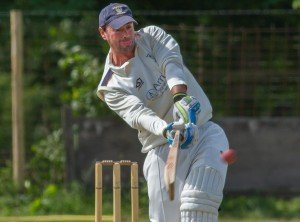 Winning start: Guy Warman made useful contributions with bat and ball as his side overcame Bishop’s Stortford

The Firsts travelled to Bishop’s Stortford for their first game of the season on Saturday.

With a refreshed feel around the club and within the team it was important that they got off to a winning start.

Having lost the toss, the Park were sent into bat on what looked to be a very good wicket and a good opportunity to get a decent score on the board.

Things didn’t quite go to plan. With the score on 16, they lost Ryan Skeggs, bowled for 2.

Adam Sergeant joined Josh Roseberry at the crease they moved the score along to 30-1 and were looking comfortable until a moment of madness from Sergeant saw him stranded half-way down the wicket as the fielder threw it into the keeper.

Charlie Randall then joined Roseberry in hope of building a partnership to settle things down.

But, with the score on 47, Roseberry was hit on the foot and given out LBW.

Soon to follow was Randall, he was caught on the back foot to a ball which went through him to get bowled with the score on 47.

Wicketkeeper-batsman Rana Arslan and hard-hitting all-rounder Matt Hutchinson came together and took the score to 66 before Hutchinson was bowled by a full delivery.

Arslan and skipper Guy Warman then put on a very important 50 partnership, running hard between the wickets and putting the bad ball away.

When Warman and Arslan both went in quick succession, with the score on 124, the innings could have easily fallen apart.

But the lower order, held together by Sadiq Kamal, managed to get the score to 154 all out. The innings was helped by the 37 extras that Storford let slip.

At the half-way stage Knebworth knew they had got themselves into a position that they could win the game.

With the bowling options they had and a surge of confidence within the club, they knew that, if they bowled in the right areas and took their chances in the field, the score of 154 would be enough.

They did just that. The opening partnership with the ball of the evergreen Sam McCrow and Charlie Randall started well and it wasn’t long until they had Stortford in trouble.

Two wickets each for the new ball bowlers reduced Stortford to 33-4.

When two chances, both off McCrow, went down, the feeling grew that the missed opportunities could be very costly.

With the Stortford opening batsman still at the crease and looking like he was going to bat the innings, Knebworth set about building pressure on him while trying to keep the wickets coming.

The change of bowling brought Warman and off-spinner Hutchinson together.

Stortford put on a partnership of 60 and, although the feeling that the dropped chances could cost the Park was growing, they knew that one more wicket and they were into the lower middle order.

With tension growing, it was Hutchinson, now bowling in tandem with fellow off-spinner Jack Orchard, who was to step up, He bowled Stortford’s No.6 then very next ball picked up No.7 LBW.

The momentum had again swung back in Knebworth’s favour but, with the opening batsman still at the crease, the game was not finished.

When Orchard then claimed a smart caught and bowled to get rid of the opening batsman, the game was nearly in KPCC’s hands.

Then came the winning moment when Orchard bowled their No.11.

All the Park bowlers did their job, with wickets shared evenly. A winning start to the season against a team who will be strong this season.

Watford Town travel to KPCC next week and the Park will be very keen to make it two wins out of two and get their home campaign off to a winning start.

Some hard work will be put in this week at training to ensure they are in the best position to do so.

Having lost the toss and being put in to bat on a green surface, Tom Liversidge and Adrian Holmes got the Seconds off to a solid start.

But three wickets in quick succession put Knebworth on the back foot. Rob Morley (54) and Louis Champion (34) did a fantastic job in rebuilding getting park to a solid base of 117 with nearly 20 overs left to go.

Sadly, the low order struggled to capitalise and the Park ended up on a disappointing 175, 50 runs short of par.

Graham Fisher (1-17) and Alex Richmond piled on the pressure with some really tight bowling and a fielding performance to match.

Sadly, dropped catches and poor consistency with the other bowlers ultimately meant Park fell short of defending the below-par total.

It was a bad start for the Thirds as they were bowled out for just 65 runs against a strong Tewin side.

Despite bowling well, a score of 65 was never going to be enough as Tewin made short work of their run chase,

Jack Randall was the only bowler to make any breakthrough as they reached their target in the 14th over for the loss of one wicket.

The Fourths fell to defeat in their opening game despite an encouraging bowling and fielding performance.

Having being asked to field, they restricted Holtwhites III’s to 200-8 with a gritty and determined showing, using a total of seven bowlers.

On a small ground the Holtwhites middle and lower order dug in, with Richard Wheeler (2-27 off 8) bowling well at the death.

In reply Richard Jones and Phil Wheeler got off to a decent start before Jones fell for 15.

Two wickets quickly followed, before Phil was joined by brother Richard to rebuild the innings.

At 71-3 off 22, Park were very much in the game but when Phil Wheeler was bowled for 32, it begun a clatter of wickets that saw Park collapse to 74-8 in a matter of minutes.

At this stage, captain Rob Crowe (41) struck some lusty blows to help the Park pass the 100 mark and secured potentially vital bonus points.

They were eventually dimissed for 127, claiming 10 points from the game.