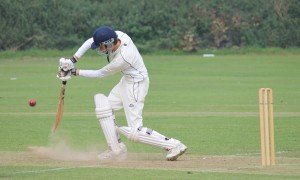 The Seconds’ game hung in the balance until rain brought an early conclusion and visitors Northchurch won on a superior run rate.

With the pitch covered since Tuesday playing conditions were reasonable.

Even so, with the exception of opening bat Jono Evetts (17), the early batsmen struggled slipping to 35 for 5.

They recovered through Archie Stephens (29), pictured above, Alex Richmond (22), skipper Gareth Jones (18) and Niels Hart (29 not out) to post 143 for 9 after their innings was reduced to 46 overs because of a break for rain.

Graham Fisher’s wily slow bowling restricted the opposition as he took 2-14 and left Northchurch struggling at 88 for 5.

But after one heavy rain break they took advantage before the weather finally won, washing out the game.

They finished on 104-5, which was enough to claim the points.

See Mike Jones’ gallery of images from the game here

A brave innings from Pete Bayford help to clinch a thrilling one-wicket win over Chorleywood III for the Fourths.

After pulling a hamstring and having to retire hurt, he hobbled back to the crease when his side was nine wickets down and needed ten more runs with two overs left.

His 28 not out with last pair partner Scott Page (12 not out) clinched the win in the final over. It was the Fourths’ first win for 15 games after they finished bottom of the table last year when they recorded just a solitary victory.

The team, however, looks a much-improved and stronger unit where Page was also the pick of the bowlers in taking 3 for 22.

He was backed up by skipper Rob Crowe (2 for 21) and Shaun Robinson (1 for 19) as they restricted the visitors to 160 for 6 on a wet wicket where batting was tricky after the week’s heavy rain.

The bowlers were backed up by young Spencer Bayford who did a tidy job behind the stumps taking two catches and only conceding a handful of byes.

Robinson and Phil Wheeler (11) gave the Park’s response a sound start but, after being 44 for 3, they had slipped behind the run rate.

As the dark black clouds loomed making rain a virtual certainty, it was important to get ahead of the run rate to ensure victory in the event of the game being washed out.

John Inman (20) and Bayford’s hitting lifted them to 81 for 3 to edge them ahead before the heavens opened. It was during this chase that Bayford pulled up with his injury.

With the wicket covered, the game was able to resume, leaving a revised target of 136 to win. Richard Jones chipped in with 12 but in the chase for victory wickets fell as they slipped to 127 for 9.

That was when Bayford, with the assistance of a runner, stepped forward.

As he and Page secured victory, they were cheered on by a large throng of players from the Park’s other teams who had all seen their matches washed out.