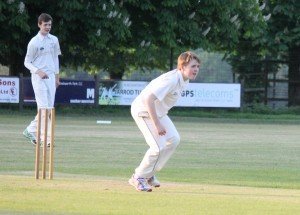 Lively: Kyle Roomans impressed with his pace and energy as he claimed a couple of wickets

The Thirds’ young bowling attack produced a disciplined performance against London Colney on Saturday – but the rain had the last word as they slipped to defeat.

A side containing eight players under 17 did well to restrict the home side to 250-6 from 49 overs as they never let the run rate get out of hand.

Kyle Roomans bowled with pace and threat and claimed two wickets, while his Herts under-15 opening partner Jack Forbes-Sobers produced six miserly overs and took a wicket with his last ball, a brilliantly directed yorker.

Skipper Ian Pickering bowled both openers after they had built a chanceless 177-run opening stand.

In reply, the Thirds were away solidly through their young opening pair Archie Stephens and Louis Clayton.

After they fell, Ian Woods (23) and Jonathan Cirkel (29*) were building momentum only for a clatter of wickets to stifle their progress.

With the score on 96-5 and only a distant chance of victory, the rain arrived to end any prospect of mounting a challenge and give London Colney the points.