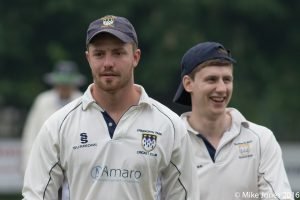 In form: Tom Liversidge led the Park reply with a fine 70

The second team fell 28 runs short in their chase for victory against Datchworth in a high-scoring game at Knebworth.

They picked up 15 points for their efforts to keep them above the drop zone.

Former Knebworth player Steve Gregory (59) and Luke Bennett (58) added 110 for the first wicket in 18 overs to put the visitors firmly in control and on course for a huge total.

But they were pegged back, with Ross Courtney (2-38) the pick of the bowlers in a final total of 244 for 8 off 49 overs in an innings reduced by an over because of a short break for rain.

Opening bat Tom Liversidge’s 70 held the Park’s innings together before he was the last wicket to fall.

Nick English (28), Ross Courtney (29) and Lewis Hutchinson (18) lent useful and aggressive support but none pressed on to the bigger score that was needed.

A bright 18 at the end from Gareth Jones gave a glimmer of hope of victory in an entertaining finish but it was not to be as he and Liversidge were bowled by opening bowler George Wallace (3-39).