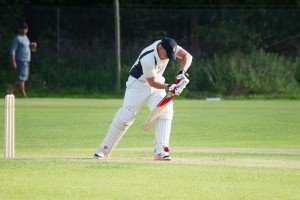 The Seconds lost by two wickets in their crucial game away to Met Police Bushey.

In a game littered with lbw decisions, four of both sides, the game never gained sufficient momentum.

Haydon Bartlett-Tasker’s excellent 50 put the Park in a strong position but he fell lbw along with three more of the Park’s first four batsmen.

Ed Wright worked hard for 18 in support and then skipper Alex Richmond battled hard for 22 to lift the total to a below-par 149.

Failing to bat for a full 53 overs was in the end decisive as it gave the opposition extra overs.

Richmond with 5 for 22 in 12 overs kept the Park in the contest with good support from all the other bowlers, but a strong stumping appeal which was not given proved critical as an attacking innings of 41 not out from No.7 Parkinson rescued the Police from 112 for 7 to win by two wickets with 152 for 8 off 46 overs.

The Park, however, remain 56 points clear of the relegation zone.