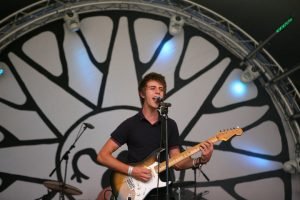 Dallenger has been playing in bands since the age of 11

Two top music acts are lined up to provide the entertainment when Knebworth Park Cricket Club holds a very special day on Sunday.

Solo artists Michael King and Dallenger will be providing the entertainment for our Music Fest at the club after the Nick Simpson Memorial match.

Michael, a regular on the Hertfordshire pub circuit, usually performs original music alongside popular acoustic covers from many genres. He’s played in several bands over the past 17 years and made numerous local radio appearances.

From the age of eleven and throughout his teens, Dallenger – aka David John Foster – toured as the lead guitarist of a Chicago blues band. In this time he played along side the likes of Wilko Johnson, The Blockheads, Otis Grand and Nine Below Zero, appearing at many festivals and shows across Britain and Europe.

Earlier, the annual cricket match will start at 1.30 and is a 20-over game between the Simpsons XI and the club.

Nick was a fine young fast bowler who, at the age of 19, had just broken in to our first eleven and had also been fast-tracked into training with the full county side when his life was so tragically cut short

The club’s clock on the pavilion is a lasting memorial to him.

He loved his music, too, so this is a fitting day to come and enjoy cricket and music.

The BBQ will be fired up, so invite along your friends and family.