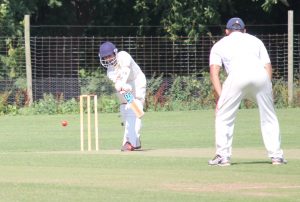 The Fourths’ young stars produced another heartening performance but couldn’t stop their side sliding to a heavy defeat at Chorleywood.

Under-14 Dhruval ‘Drav’ Pawar led the way with three wickets but the home side’s imposing total of 268-4 proved well out of reach.

For the second week running, stand-in skipper Leroy van der Westhuizen kept the team’s tradition going by losing the toss and Chorleywood had no hesitation in selecting to bat first.

The hosts made the most of the very small boundaries and quickly raced away to an opening partnership of just short of 100 with very few singles.

Pawar took the fight to the visitors and claimed the first of his three scalps when he removed one of the opening batsmen for 42.

He was backed by under-13 Dylan van der Westhuizen, who got in on the action and removed the other opening batsman for 80.

The onslaught continued and when Pawar removed the No.4 without troubling the scorers, the Park’s tails were up and started to believe the match might not be over yet.

Pawar continued with his accurate late swinging yorkers to remove the next batsman in the 46th over before Chorleywood decided to declare on 268-4.

Park realised a chase at five runs per over was not impossible especially when opening batsman, Richard Wheeler also took advantage of the small boundary and despatched the first ball of our innings for four.

Unfortunately, the next delivery saw Park lose its first wicket.

After his great performance with the ball, skipper van der Westhuizen decided to open with Pawar and he responded positively by playing some great shots before he too fell victim to what can only be described as a “ghost ball” down leg that somehow managed to clip his off stump.

Vice-captain Phil Wheeler was joined by another under-13 debutant, left handed Joshua Kerton who quickly established himself and proving that, if you are prepared to use your feet against spin bowlers, you also increase your chance of survival.

After Wheeler’s dismissal, Kunal Sharma, another left-handed batsman, and Kerton started rebuilding the innings before Sharma was dismissed on the boundary on 13.

Kerton kept fighting for Park as he top scored on 27 before hitting the ball straight to mid-off, only to be dropped and everyone sighed a sigh of relief.

Unfortunately, Kerton tempted fate off the very next delivery, playing the exact same shot to the same fielder, only this time to be dismissed.

Under-13 team mate van der Westhuizen had joined him shortly before his dismissal and the two boys played some beautiful cricket shots and showed maturity beyond their years through their decision-making and shot selection in very difficult circumstances.

Another “ghost delivery” bouncer saw van der Westhuizen receiving his marching orders after trying to avoid the high ball and Chorleywood’s wicket keeper, managing to catch him behind.

With the tail wagging and Park on 100/8, skipper van der Westhuizen tried to weather the storm and patiently faced a few deliveries before Dean Digweed was dismissed on 15.

With the score on 111 and Park needing another 158 runs to win, Leroy (8) received a full toss and hit it straight to mid-off ending any possible further bonus points as the next wicket fell without any runs being added.

For the second week running, Park proved that the future is very bright with our star under-13 and under-14 players and, although the result didn’t go their way, the boys remained positive and showed they would always fight to the end.

A strong signal is being sent to our opposition that Park is not done yet this year and will continue to fight for survival and win our remaining five matches.