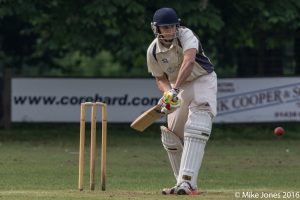 Golly, Josh: A superb 120 not out from Josh Roseberry was the cornerstone of the Park’s victory

A brilliant unbeaten 120 from opening bat Josh Roseberry set up a convincing 74-run win over Shenley on Saturday.

His century held the Park batting together in a challenging total of 251 for 5 and then Graham Fisher with 4 for 38 and Keagan Foley 2 for 30 helped bowled out the visitors for 177.

It was a win that upset the form-book with Shenley riding high in ther table and pushing for promotion while the victory enabled Knebworth to move out of the drop zone.

Roseberry was supported by Rob Morley (8) in an opening stand of 34 in the first 14 overs. Foley (41) helped take the total on to 106 before he was unlucky to be run out.

Tom Liversidge and Matt Hutchinson both fell cheaply which heralded the arrival at the crease of Runa Arslan who then unleashed a blistering 42 off only 15 balls.

After he fell for 42, stand-in skipper Adam Sergeant (22 not out) then helped Roseberry maintain the rapid flow of runs with a stand of 57 in only seven overs.

The Park then made the crucial early breakthrough when they removed Shenley’s Northants and England under-19 Charlie Thurston who after surviving a huge appeal for caught behind was then caught off the bowling off Hutchinson for only 18.

Graham Fisher then removed the other opener before Foley who repeatedly beat the bat and had a handful of catches dropped before he bagged two caught and bowled, one an excellent catch to dismiss Anooj Vadgama and No.3 Jordan Orban, who had been leading the visitors effort to get back in to the game with a half-century.

Then, from 104 for 4 wickets started to fall with regularly as Fisher and Jack Orchard combined to carve through the middle order with the two slow bowlers operating in tandem.

Orchard took a brilliant caught and bowled and took a steepling catch in the deep off Fisher to dismiss the threatening Lathan for 18. Orchard finished with 1 for 46.

Shenley panicked in the search for runs and chanced their arm with quick running which contributed to two more wickets and could have been even more.

They were all out eight overs before the end to complete a valuable win for The Park who leapfrogged Kings Langley to take them out of the bottom two in the table.