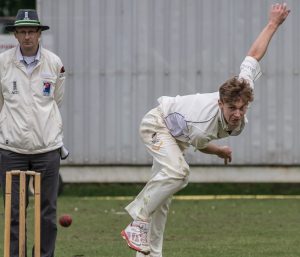 Unlucky: Ben Orchard crashed a superb half-century before being needlessly run out

The Thirds wasted a glorious opportunity to pull off an unlikely win over table-topping Old Haberdashers on Saturday.

They were cruising to victory with their opponents looking short of ideas and inspiration when Ben Orchard was needlessly run out just after bashing a brilliant half-century.

Suddenly, the visitors’ innocuous bowlers, who had been serving up a succession of full tosses and half-trackers, found some rhythm and brought a halt to the scoring and found some unlikely ways to nip out a timid middle-order.

Seven wickets fell for 34 runs and the chance of a much-needed 30 points slipped away.

Earlier, the Old Haberdashers batsmen dominated after being put in on a benign wicket, cruising to 277-1 off just 42 overs.

Jack Forbes-Sobers was the only wicket-taker and the pick of the bowlers but there was little to be done to stem the scoring.

While the Thirds might rue several easy chances that were spurned as their in-form opener struck 172 not out, the early declaration probably played into the Park’s hands.

The OH batsmen demonstrated why they are runaway division leaders but their bowling looked as poor as any in the league as Archie Stephens (34) and Jonathan Cirkel (46) played a succession of stylish strokes in a half-century opening stand.

Orchard (51) and Tom Hills carried on the attack punishing some dire bowling as they plundered another half-century stand and victory looked a formality.

But the game turned when Hills (24) called his partner for a run then changed his mind and Orchard was unable to make his ground.

The Park slumped from 146-2 to 180-9 before a spirited last-wicket stand between Paul Sheffield (30) and Dave Mantle (10*) again exposed the real lack of menace in the OH attack.

The final score of 222 all out meant the Park claimed ten valuable batting points but it was scant consolation for a game which they should have won easily.