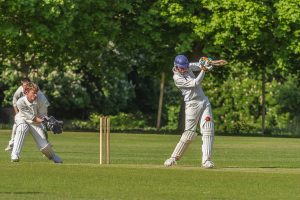 Heroic Harvey: Harvey Turner starred with bat and ball as the Thirds suffered another frustrating defeat

A superb spell of bowling by Harvey Turner set the Thirds on course for victory only for a middle order batting collapse to cost them the points against Redbourn II on Saturday.

The teenager claimed four wickets in a 15-over opening spell which left the visitors reeling with six wickets down and barely 70 on the board after 30 overs.

Although Redbourn dropped anchor to stage a partial recovery and finish on 177 all out, the Park were cruising towards their target with a half-century opening stand.

But a succession of loose shots meant they lost six wickets for 15 runs and were eventually dismissed for 141. It left them to rue yet another what-might-have-been performance and a missed opportunity to claim 30 points in their relegation battle.

Earlier, Redbourn won the toss and elected to bat on a dry-looking surface. They struggled through the first 30 overs with Turner’s subtle away drift repeatedly bamboozling the batsmen and leaving them prodding at thin air,

At the other end, Dave Mantle (2-33) was matching him for control as his excellent 15 overs of inswingers was rewarded with two wickets in two balls.

Once they had finished, Catherine Cirkel (1-31) kept the batsmen in check with her eight overs of off-spin. The innings was completed with two superb run-outs, one a bullet throw from the boundary by Jonathan Cirkel and the other an agile one-handed pick-up and throw by Mantle.

In reply, Bobby Orlandi (25) continued his good form as he forged a steady half-century stand with Tom Hills. But after they departed, another four wickets slipped away with some ugly shots to some ugly balls.

Turner, batting with increasing assurance and playing some flowing drives, began the rebuilding when he teamed up with Catherine Cirkel, who unleashed a string of powerful leg-side hits to make an excellent 29, her highest score for the Thirds.

Despite more defiance from Mantle which briefly threatened an unlikely win, it was not to be, with Turner left stranded on 35 as the last wicket fell.

It was another heartening performance but with only five games of the season left, the Thirds will have to remember how to win games if they are to avoid relegation.