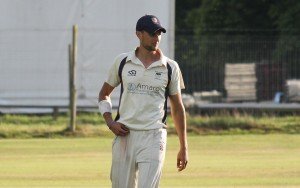 The Thirds’ faint survival hopes took another dent when they fell to a narrow defeat at the hands of Old Albanians.

With perfect weather and an excellent looking wicket, stand-in skipper Ian Woods made the easy decision to bat after winning the toss.

Steady progress was made with the Park openers not having any problems but then a forced bowling change half-way through the ninth over brought home side two wickets in three balls.

Then, after a positive start, opener Bobby Orlandi was dismissed for 31 to leave Park in trouble at 48-3.

This brought Matt Inman and Charlie Randall together and they began to rebuild the innings, keeping the scoreboard ticking along with some excellent running.

The partnership was brought to an end when Inman (38) was unluckily judged to have edged through to the wicket keeper.

An excellent 90 runs had been added and, with 15 overs left, the pair had set up Park for big push to get over the 200 mark.

Randall continued his good work ably assisted by younger brother Jack (15) before finally being dismissed for a superb 76.

Some big hitting from the OAs openers got their response off to a flying start but the change of bowlers to Charlie Randall and Harvey Turner began to stem the flow of runs and it was Turner who struck first with 69 on the board.

It was Randall’s turn to strike in the next over picking up two wickets to put Park firmly back in the game at 74-3.

Held together by their opener, the OA innings continued to tick along but two further wickets for Turner (11-0-40-3) kept Park in with a chance.

After returning to the attack, Woods picked up the sixth wicket with the score on 174 and the game was back in the balance with 40 runs still needed.

Unfortunately, though Park were just unable to find the final wicket and OAs edged home in the 46th over.