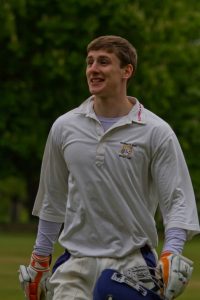 Spin proved the key to the game as the Seconds went down to title contenders Redbourn.

While the Park batsmen got bogged down against the visitors’ impressive slow bowlers, there seemed little the Park’s twirly men could do to check the scoring rate.

The Park’s spinners went at nearly six an over compared with Redbourn’s 3.5 – a deciding factor in Redbourn easing to a five-wicket victory.

A sparkling 40 off 23 balls from Haydon Bartlett-Tasker meant Park raced to 60-1 from just six overs.

However, this simply accelerated Redbourn’s introduction of their strong spin attack – by far the best in the division – and on a overly dry track their accuracy proved impossible to score off quickly as they bowled 43 overs during the innings.

Jono Evetts fell for an excellent 48 just after the first drinks break and in the 18 overs that followed, Park only added 36 runs – albeit for the loss of just two wickets.

Captain Winchester remained at the crease during this time but added just four runs. However, he was finally able to accelerate once he was joined by Alex Richmond – the two running hard between the wickets as the final overs arrived.

Winchester finished unbeaten on 57 and Richmond scored 31 as KPCC posted a respectable 244-8 from 53 overs – although, in truth, 275 would have been par.

Again, the Seconds bowling proved their undoing. Despite the return of former club first-team stalwart Paul Slade, the Park could not control the run rate at any stage in proceedings. Hayden Bartlett-Tasker picked up three fine off-spinner’s wickets – but it was not enough to stem the scoring.

Nevertheless, 15 points was still a valuable haul for the Seconds ahead of their relegation 60-pointer against Met Police Bushey next week.