Fourth XI: Dan does the damage before Cirkel seals it 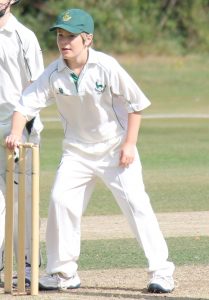 Dream debut: Dan Roomans was in great form with the ball during his first senior game for the club

Debut boy Dan Roomans and in-form batsman Jonathan Cirkel set up a heartening win for the Fourths against Boxmoor II on Saturday.

Under-13 skipper Roomans ripped the heart out of the visitors’ batting before another half-century from the side’s senior batsman saw them chase down a challenging total.

It was a confident team performance, which bolsters a side looking to win its remaining fixtures to avoid relegation.

It was also another sign of the strength in depth among our under-13, under-14 and under-15 players.

Earlier, on a very hot afternoon, stand-in skipper Leroy van der Westhuizen kept up the team tradition by losing the toss and Boxmoor said they would have a bat.

After 15 overs, the opposition was going at five runs an over and looking well poised to reach a target of 250-plus but the innings turned on a moment of brilliance from Phil Wheeler at first slip.

Noticing the opposition captain strolling back to his crease, he had a shy at the stumps at the non-striker’s end and, with a direct hit, removed the skipper.

It was somewhat controversial as the umpire considered whether the ball was dead but, after consultation, kept with his original decision.

Boxmoor continued at a good pace until the first bowling change when Kunal Sharma got his first of three wickets removing the Boxmoor opener for 45 courtesy of Catherine Cirkel’s catch at mid-on.

Well supported from the other end by under-14 Dhruval Pawar, they ensured the Park kept piling on the pressure and stopping the run fest.

In came Dan Roomans, skipper of the KPCC under-13 squad for his debut match – and three wickets fell for seven runs in the next five overs.

He was well supported by his under-13 team mate Dylan van der Westhuizen, who kept up the pressure bowling from the other end and took two great catches.

It left Boxmoor at 152-6 at the second drinks break before Roomans rounded off his spell by catching his final wicket off his own bowling.

Greg Brewer decided he, too, wanted to get in on the action. After waiting all season for a wicket two came along at once – the second to a superb ball which scattered the stumps and left the opposition on 176-9.

The final partnership lasted for nearly 20 minutes before Catherine Cirkel induced a catch for her dad, Jonathan,  to wrap up the innings on 192 all out.

It didn’t take long for the opposition to get their first scalp when Richard Wheeler was dismissed in the first over.

Another batting collapse seemed very possible until Jonathan Cirkel (74) and Phil Wheeler (26) steadied the ship for the next 22 overs in an 81-run partnership that created a much-needed platform for the team.

Sharma took the attack to the opposition for a quickfire 35 off 31 balls before miscommunication led to a run out.

Catherine Cirkel (20) continued the attack and hit some exceptional shots before being caught behind.

Dylan van der Westhuizen (12 not out) then teamed up with Dean Digweed with 18 runs required from nine overs to take KPCC over the line.

They were well supported by the Seconds who had just finished their game as van der Westhuizen played some great straight drives and cut shots.

With just two needed for victory, he cut another one to backward point and ran two easy runs to secure the victory for the team.