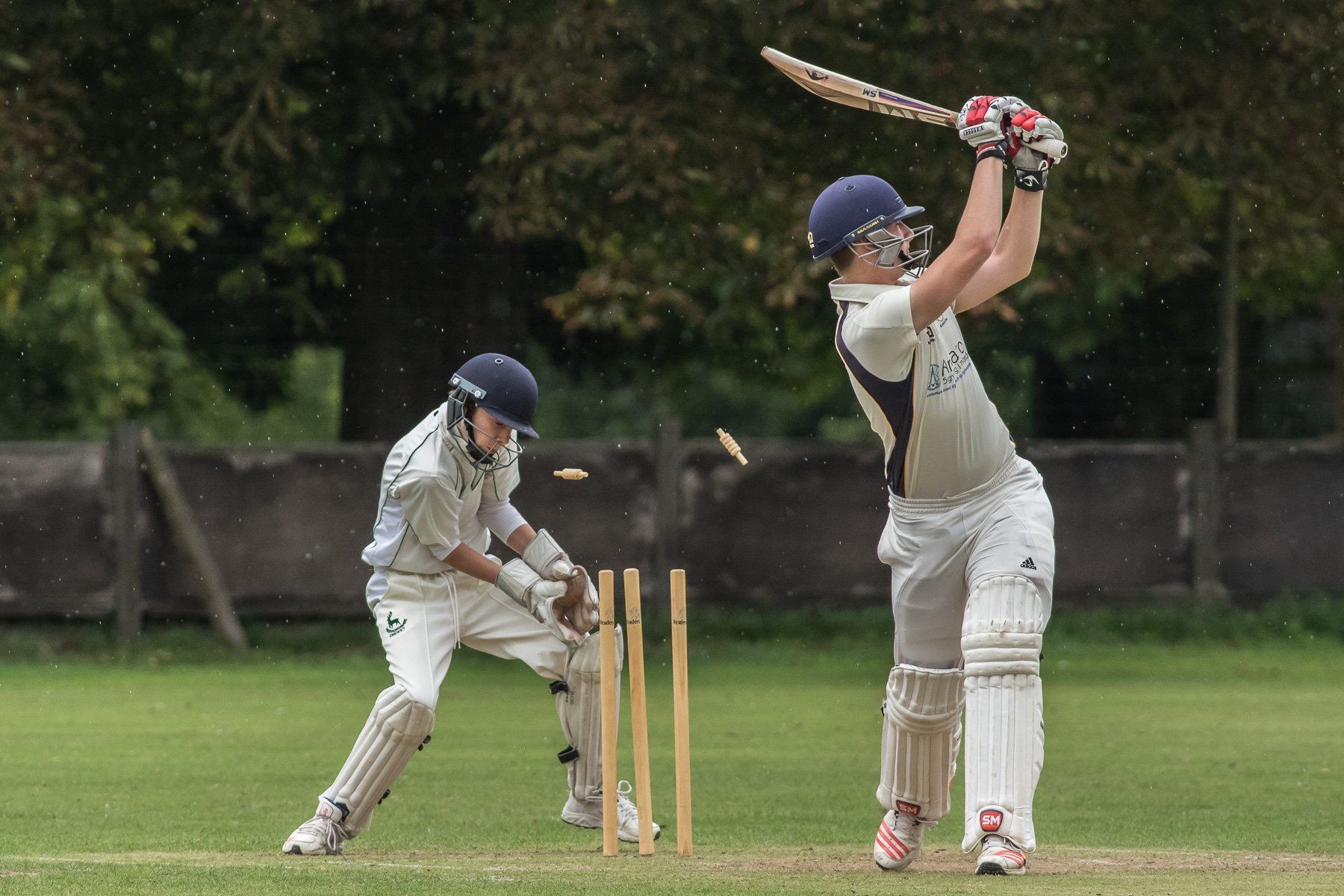 Owzat: Luke Chapman is clean bowled… but earlier he played a big part in the win by claiming 3-18 PICTURE: MIKE JONES

Whether you call it Mission Impossible, the Great Escape or an Houdini Act, Knebworth Park avoided relegation from Saracens Herts League Division One by beating Hitchin on Saturday, to complete a most amazing transformation in securing their sixth win in seven games.

It now puts them 34 points clear of St Margaretsbury and they remain 16 ahead of Broxbourne.

Their cause looked pretty hopeless seven weeks ago, seemingly doomed for relegation,  a massive 65 points adrift in the relegation zone.

Under Aussie skipper Sam Gardiner the players grew in confidence, especially after their win in late July against champions Luton and Indians. The run continued with their powerful bowling unit proving too much for opponents and their once brittle batting finding resilience.

That combination was in evidence on Saturday as Hitchin succumbed to enable the Park to create clear water from the bottom two in the table before this coming weekend’s visit to promotion chasers Dunstable.

Against Hitchin, Gardiner won the toss and chose to bowl first. With a gloomy weather forecast and the prospect of rain, the Park sped through their overs at a rapid rate to ensure the match was completed in time.

Hitchin rallied through Barry Hann (40) and Farrukh Chodhry (12) and at 126-6 were looking to spike Knebworth’s victory surge.

But then the last four wickets fell quickly for the addition of only 13 runs as young off-spinner Luke Chapman snapped up 3 for 18.

Chasing the total of 140 for victory, there was an early setback as both Chapman and Adam Sergeant fell cheaply.

Stand-in opener Robinson (30) and Gardiner (39) led the recovery and were well on course for victory before Robinson holed out at 58.

Gardiner and Charlie Randall (18) then took them past 100 before Gardiner was caught.

Any concerns were soon swept aside as Warman, playing in pain from a tooth infection, took just eight scoring shots to complete the task with a six and seven fours in a quick-fire 34 not out as the Park hurried home by five wickets with 143 for 5 and 19 overs to spare.

A first-class all-round team effort. Perhaps, if they’d shown a glimmer of this form in the first half of the season, they may have been looking at promotion rather than the dramatic fight to stave off relegation.

There’s a bumper gallery of pictures from the game here