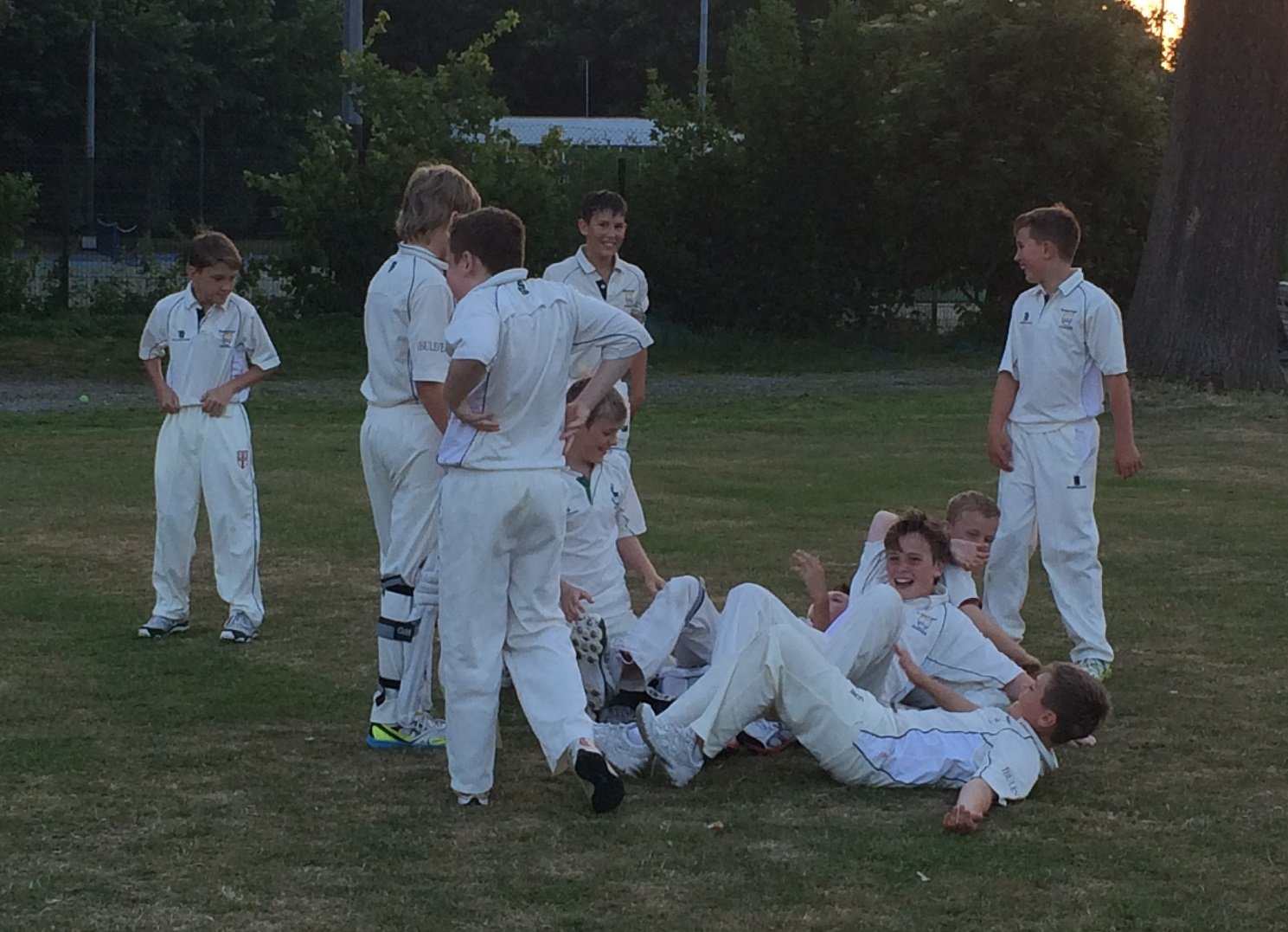 Celebrations: The under-12s enjoy their eighth win of the season

Hoddesdon welcomed us to their main pitch on the hottest day of the year so far – so much so that one or two of the boys might have wished it were a tad cooler.

The parents, however, didn’t look too disappointed as they setup camp along the eastern banked edge of the ground, well bathed in hot sunshine.

Skipper Dan lost the toss and our hosts elected to bat on what transpired to be a slightly uneven wicket, complemented however by a quick outfield.

Dylan and Jack had the new ball, while Dan orchestrated an attacking field

Both boys bowled very tightly, with a number of ooohs and aaaahs as the ball whistled past the stumps.

Dylan was to draw first blood after a maiden first over, clean bowling the Hoddesdon No.2 in his second.

Thereafter, wickets were uncharacteristically hard to come by.

That said, the quality of the bowling and fielding was unquestionable, with our hosts only managing to post 14 runs after the first six-over spell.

Freddie and Kobie were first change, the former bowling with good pace and bounce, and young Kobie bowling excellent line and length as usual.

The Hoddesdon batsmen played patiently – despite one of the boys suffering a bad nose bleed (no, not from Freddie’s short pitch bowling) – and, while there weren’t too many bad balls, those that did come along were duly punished.

Dan had Cal and off-spinner Nav in at third change, with Hoddesdon picking up the run-rate a tad at 47-1 off 12 overs.

Bearing in mind the searing heat, the boys were able to keep things pretty tidy in the field, and particular mention must go to Ollie and then Charlie who shared the gloves today; along with the two batsmen, it must have been pretty warm under those helmets.

Nav bowled well, with several close stumping chances attempted by Charlie, while Cal had the batsmen fishing outside off stump once or twice.

With the score on 87-1 after 18 overs, Dan asked Spencer and Ollie to run out the last two overs in the hope of picking-up a couple of late wickets and keeping our hosts well under a hundred.

Spencer conceded just a single and Ollie bagged a welcome wicket (bowled) in the last over, as our hosts closed on 92-2 off 20 overs.

After a brief interval, and with the shadows stretching across the pitch, Spencer and Ollie walked out in confident mood.

Ollie cracked a wonderful cover drive for a boundary first ball but, after surviving a dropped catch, he was then to fall caught and bowled by their opening seamer a couple of balls later.

Jack and Spencer then set about rebuilding, both boys playing some lovely drives and cuts, and Spencer flicking a couple of hostile bouncers outside his leg stump down to the fine leg boundary.

Both boys played patiently and positively, scoring well above the asking rate with the scoreboard showing 34-1 at first change after six overs.

But as is often the case, a change of bowler can sometimes upset a batsman’s rhythm and so it proved to be as Spencer found himself bowled against the run of play in the seventh.

In came Dan, who was back in the shed almost as quickly, chipping a top edge to the keeper first ball.

Unsurprisingly, Hoddesdon had their tails up after two quick wickets but Jack and Josh carried on as if nothing had happened, both boys running lots of good singles and punishing the bad balls as and when they came.

Josh in particular was timing the ball beautifully as the unmistakable, meaty crack of ball against willow radiated round the ground on more than one occasion.

Jack finished off the match with a lovely on-drive through mid-wicket for four, taking our score to 96-3 after 14.3 overs, making the result eight wins from nine with one to play.