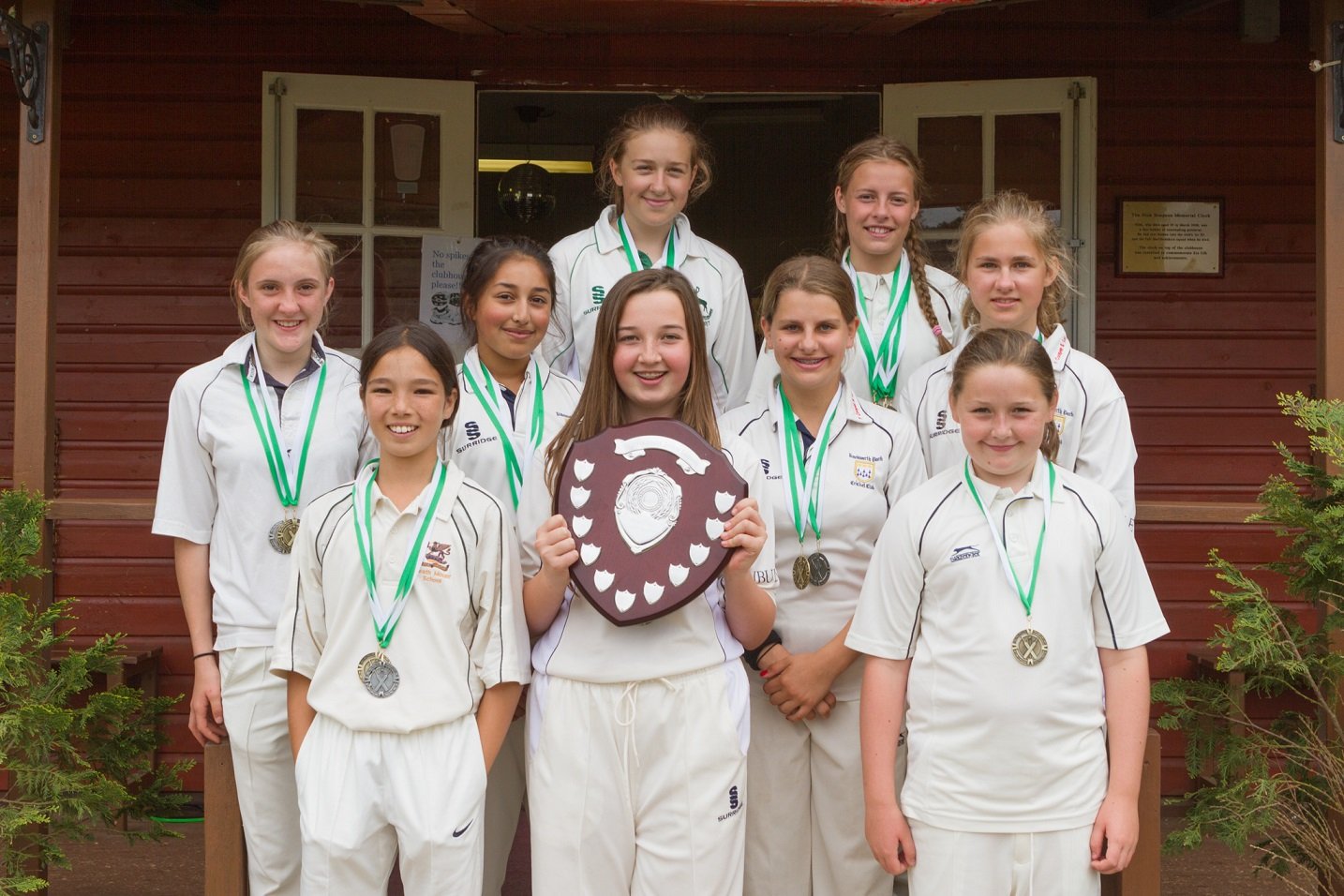 Winners: The girls with their trophy

We all knew it would be a close game with our opponents Abbots Langley having won the corresponding final against us last year by 1 run and also playing in our only close league game this season. The final didn’t disappoint and it was another very close affair.

Abbots captain Elizabeth won the toss and put Knebworth in to bat.

Catherine and Emma were first pair for us and both played well and gave us an excellent start with Catherine hitting three fours in her 17 and Emma one in her nine.

Unusually for the girls league, there were no extras so we were at 226-0 after the first four overs.

Safia and Olivia were next up. With Safia’s lightning speed between the wickets, we were hoping for several quick singles to be taken in this set of four overs but unfortunately things didn’t start well with Olivia getting run out on the last ball of the first over.

The girls then played sensibly but with five runs being lost for a wicket and scoring runs being more difficult to come by in this form of the game, it was unfortunate that Olivia was bowled once and caught once, too. However, although the score had dropped to 222-3, it wasn’t a bad start.

The third set of four overs saw Hannah and Holly arrive at the crease.

Hannah, in her first cricket season has improved massively with bat and ball and both girls did well.

Holly, who is naturally an attacking player of anything short, was unlucky to get caught from her first shot by one of Abbots best players but made up for it with a couple of well hit fours afterwards.  Hanna too scored a four.

We did miss out on some critical singles though during the four overs (perhaps not surprising as the girls hadn’t batted together previously) but the score had recovered to 237-4.

With us only having nine players against Abbots ten, they had asked Hannah and Olivia to bat two overs extra each with Charlotte B.

A risky run in the first over saw Charlotte getting run out and with some tight bowling just another five runs (or a net of 0) in the first two overs.

Although Charlotte started to put some shots together in the second set of two overs, more tight bowling saw Olivia getting bowled.

The score after 16 overs and a good start was therefore a below-par 242.

With big hitters Izzy and captain Charlotte W deliberately left to be last pair, we knew they would have to score and score well to put us in with a good chance of winning.

They didn’t disappoint with some excellent running  and some well-timed boundaries.

Charlotte with 19 and Izzy with 13 helped The Park close out their innings with a defendable total of 277-6.

However, we knew we would have to bowl well and, with one less fielder than the opposition had, field well, too.

Abbots innings started well for us.

Charlotte W took the decision to rotate bowling as much as possible to avoid any batting pair dominating one bowler and therefore the first overs saw Safia, Charlotte W, Emma and Charlotte B all having one over each.

As a tactic it worked with Safia getting a wicket with her third ball (catch taken by Catherine) and then Charlotte B bowling the other opener.

So, a bright start with us and Abbott’s well behind the required run-rate at 208-2.

Continuing the bowling rotation for the second pair say Catherine take a wicket with her third ball but unfortunately extras in the next three overs (Holly, Hannah, Olivia) saw Abbots get back ahead of where we had been after eight overs and progress to 231-3.

The real game-changing spell then started with Abbots captain Elizabeth hitting Charlotte B for a boundary and a couple of singles before launching into Charlotte W’s over with a big six and a two and with four byes also being conceded.

Catherine’s over for just a single and Emma’s for just two managed to settle the assault but Abbott’s had moved to 255-3 from 12.

Another 20 runs from the next four overs without the bowlers bowling badly pushed Abbots within two runs of Knebworth’s total with four overs left to play.

Another four byes being run meant that extras were also beginning to cost us and probably should have resulted in a field position change.

However, with one fewer fielders, filling every gap was going to be difficult.

The last Abbots pair then simply had to not get out and score a couple of runs (or wait for an extra) to win the game for them.

However, a complete mix-up with calling between the two batters saw our hopes reignited with a run-out. Nerves were beginning to play their part!

A tight over from Charlotte B but with a wide meant 276 after 18, leaving two runs for a win from two overs required.

Despite five good balls from Charlotte W in the penultimate over, one beat Izzy (who had kept well throughout but was standing up to the wicket) down the legside and rolled down the hill for four byes.

All the batters therefore needed to do was see out the last over.  A couple of singles were taken and Abbots were crowned deserved league winners on the day.

Having lost by one run last year against the same opposition and 5 runs this year, the girls will be understandably upset and disappointed with this year being the last year for most of them in the under-13 league.

However, they played well throughout the season and have demonstrated fabulous team spirit.  With Hannah, Mollie and Imogen (both unavailable for the final) all new to the squad this year, the girls have bonded superbly.

My thanks to all the girls and their parents for making it another enjoyable season.

With only four teams in the under-17 league, the top two teams would go through to the final.

In the league games, we had soundly beaten St Albans and (there’s no better way of saying it) thrashed Harpenden and Hemel had conceded against us. So, we went through to the final with maximum points.

Who our opposition was to be wasn’t known until the Thursday before the final when Harpenden conceded against Hemel and, with Hemel having beaten St Albans on the Tuesday, we were to play Hemel.

A final that should have been a showcase for girls cricket with the two traditionally strongest girls sections in Hertfordshire playing against each other and having approximately 14 county players (under-15 and ubnder-17) on display.

What actually happened was a massive disappointment to our girls, to all the parents, the coaches and the league itself.

Hemel elected to prioritise a ladies match ahead of the girls final and got their girls to play in that instead and conceded the final to us.

Not surprisingly, this decision (bearing in mind the commitment to the final date was made ten months ago) ruined what should have been an opportunity for the girls to play through the disappointment of the under-13 final as well as show how good they are as cricketers rather than winning the final by default. Something no-one really wanted.

Again, thank you to all the girls and parents.