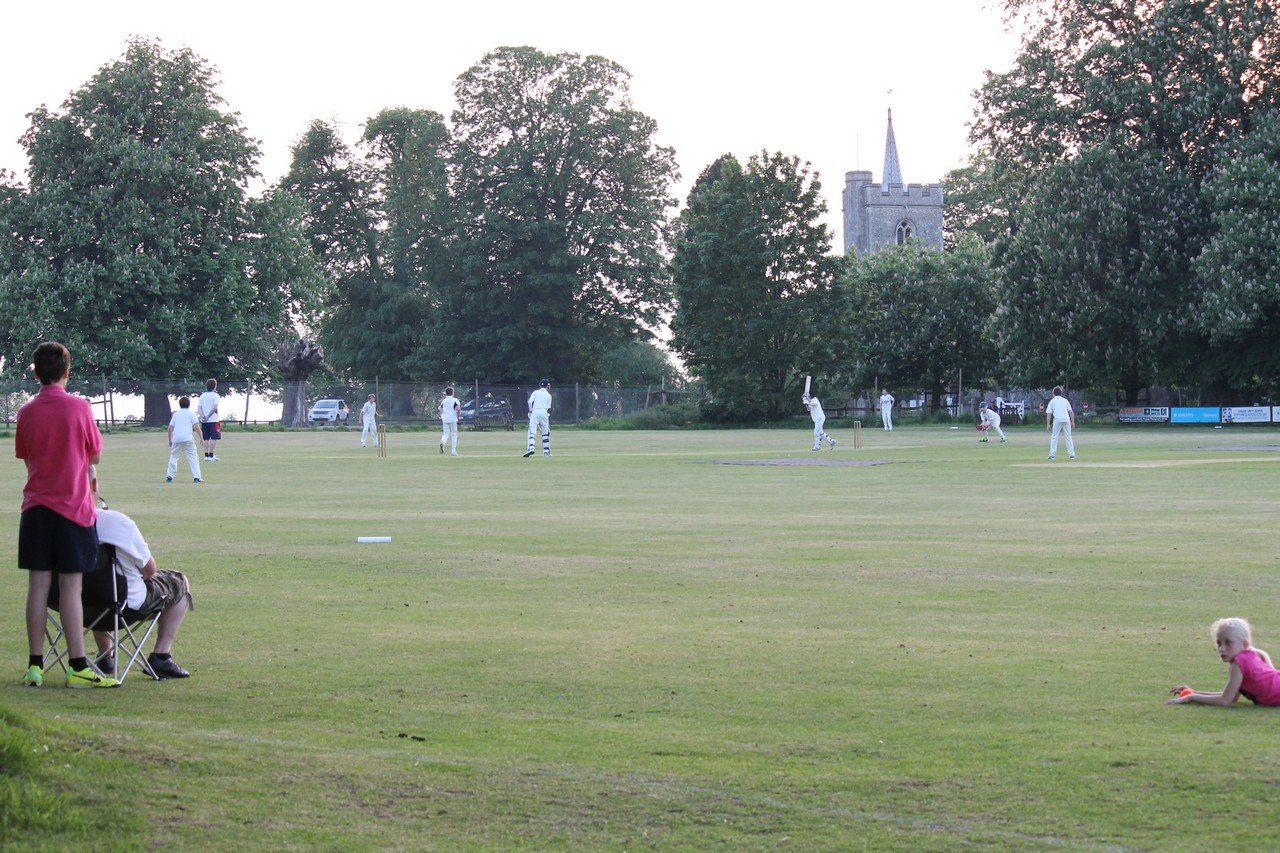 On a beautiful evening at the Park (despite the breeze which was pretty chilly as an umpire!), the under-13B season at last got under way with a game against Hitchin.

The under-13B side is intended to allow the girls at the club to play more cricket (and often more competitive cricket) than possible just in the girls league but also to enable some of the under-12  boys and the few under-13s we have to get some other cricket, too.

Hitchin operate their B team in the same way which meant that we had ten girls in total playing, four from Knebworth and six from Hitchin.

Owing to availability issues, we thought we were going to play the game with only nine players but when two boys failed to make the game because of school commitments running late, we had to play with seven. However, in the spirit of the B league, Hitchin agreed to lend us fielders throughout our innings.

Anyway, a toss was ‘agreed’ so that Knebworth, owing to the low numbers at the start of the match, would bat first.

Drav kindly volunteered to open the innings along with Catherine (who was volunteered!).  Drav played a couple of nice-looking defensive shots against Hitchin’s opening swing bowler and then a couple of byes left just one ball of the over left.  Drav then lifted his first main attacking shot (not a lot wrong with it really) and was caught at square leg.

Jenna, the Hitchin opener from the other end, then bowled a very tidy maiden against Catherine.

Rag, having replaced Drav then was bowled on the third ball of the next over. Knebworth were now in trouble with the score being 2 for 2 (two byes in opening over).

However, Rag’s wicket brought captain Charlotte W to the wicket and she immediately got off the mark with a nice two down to third-man.

She and Catherine then set about building a sensible innings each with both blocking the good balls (of which there were plenty) and hitting the bad ones.

Catherine smashing a glorious drive through extra cover was the starting point of some quick runs with another four following quickly afterwards and Charlotte enjoying two leg-side deliveries (one full toss) being smashed into the boundary.  So, things were looking much better and we had progressed to 38 from eight.

Catherine continued to capitalise on the poorer deliveries and another three fours and a two in the next few overs quickly took her to retirement at 25.

Charlotte W was then joined by Charlotte B who, after a couple of shots requiring a certain umpire to quietly remind her to use her feet, kept up the scoring rate with some nicely timed shots including one back over the bowler’s head for four.

Charlotte W though was soon run out (need to work on the sprinting!) for a very handy 17 and Charlotte B kept Will (caught for 1) and then Olivia company (both running well when called) before she had to retire for a very impressive 28.

With the lack of players, this unfortunately meant that we had no one to join Olivia at the crease!  Therefore, we agreed to hold the score at that point but allow Drav to return to the crease to give he and Olivia more batting time and a couple of the Hitchin bowlers to have a go.

Hitchin’s innings started with Charlotte W opening the bowling from one end and Rag the other.

A good four from Callam (one of Hitchin’s stronger players) from Charlotte’s tidy opening over was followed by a risky single that didn’t work out in Rag’s over with Drav fielding well and Charlotte B doing the rest to remove him.

The rest of the innings was dominated by Knebworth’s bowling attack.

Will bowled with a very good line and a decent pace and removed another potentially dangerous batsman before also getting another wicket (caught by one of Hitchin’s substitute fielders!).

Drav bowled three super overs rewarding him with outstanding figures of 3-2-2-2, his first wicket coming with his first ball with a well-taken catch at point by Catherine before bowling the No.5 on the last ball of the same over.

Liv continued where she left off last season with a rapidly improving bowling action and she had great figures of 3-1-6-0, tying down Hitchin’s captain Lucy.

Catherine bowled three good overs of off-spin with a good choice of variation resulting in her trapping Lucy plumb in front with a quicker ‘swing’ ball.  Something for the two girls to chat about at county training on Friday!

With Lucy’s departure, the hopes of a Hitchin win really disappeared despite a valiant effort by Holly who hit three really nice fours.

A rapid change from keeper to bowler by Charlotte B (with Catherine going to keeper) meant that we could actually bowl all 20 overs (limit of three per bowler in the B league) and after a couple of looseners she had a good second over maiden.

Charlotte W from the other end was rewarded for her accurate bowling with a well-taken catch behind by Catherine. Hitchin’s innings closed on 74 – 23 runs short of our total.

A good win for the side but more importantly, a game played in tremendous spirit by both sides.

A big thank you to Hitchin for the loaned fielders and for the boys and girls of Knebworth for bonding so quickly as the two sets hadn’t met before the game started.