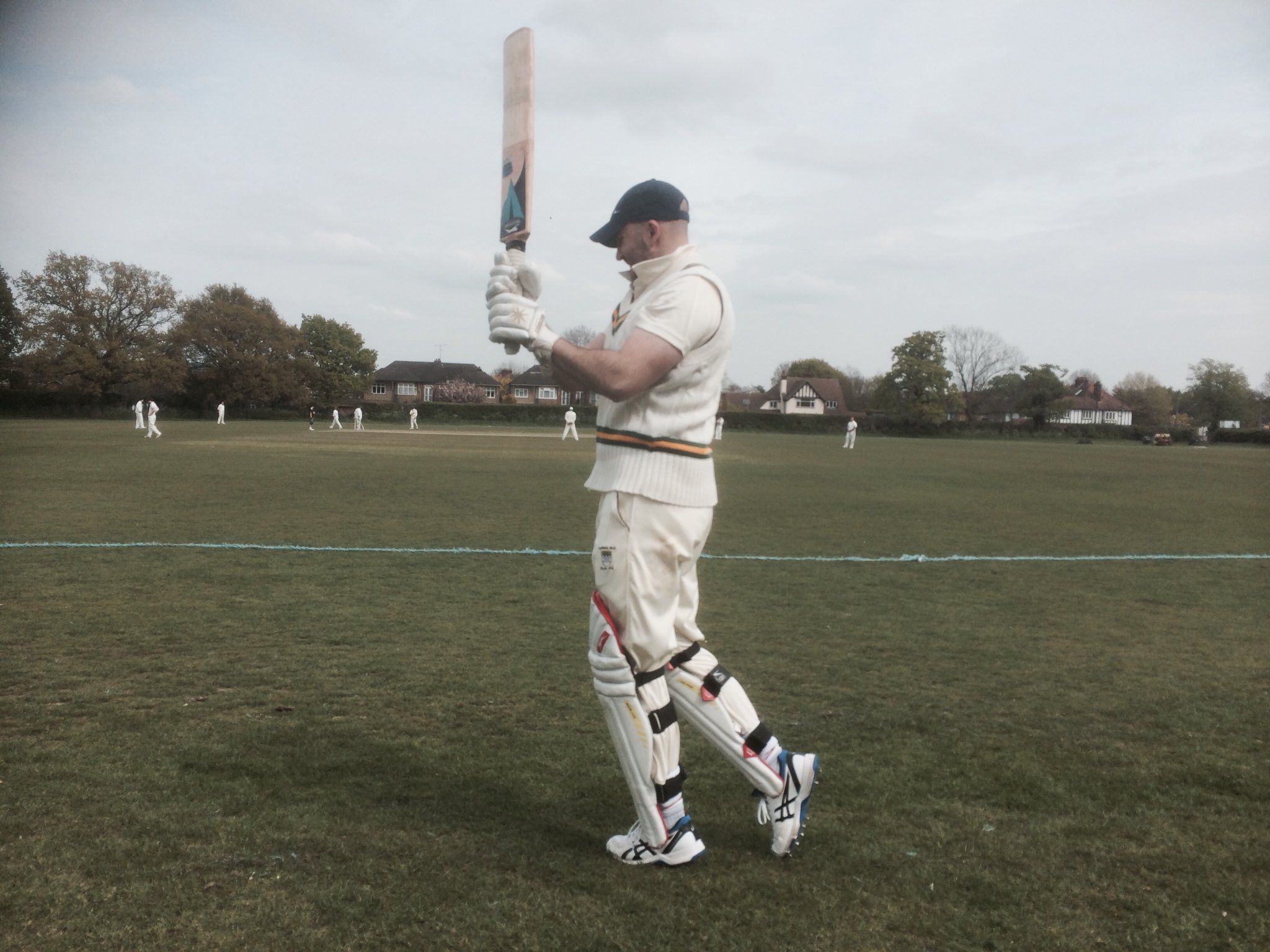 Warm-up: Sean Carmody prepares to bat in the Thirds fixture against Cheshunt

Knebworth Park’s new recruit Aussie Sam Gardiner locked the batting together with an impressive 98 not out as the Firsts compiled a useful 200 for 4 off their 45 overs against St Albans in the final round of warm-up matches on Saturday.

Another newcomer Tom Liversidge (31) and Adrian Holmes (27) had provided a solid foundation and Adam Sergeant chipped in with 22.

After opening bowler Sayf Khan bagged an early wicket, the Park then missed crucial catches and the visitors eased home comfortably by nine wickets with seven balls to spare.

For the Seconds, Ollie Pitts and Shaun Robinson put on 73 for the first wicket against Chipperfield Clarendon; Mark Winchester (21) and Alex Richmond (38) maintained the attack before Guy Warman and Michael Rayner (51 not out) unleashed a dramatic assault with a fifth wicket stand of 124 in 9 overs. Warman’s 91 came off only 35 balls, hitting his 50 off only 17 deliveries. They ended on 320 for 7 off their 45 overs.

Chipperfield were always behind the run rate but they gave it a good effort with a steady 62 from the opener before No.5 Methin struck a rapid 84. Further bold hitting from the tail boosted the score to 289 for 9.

A spirited batting effort from Joel Curtis (48) and Harvey Turner (40) helped the Thirds recover from a disastrous start at Cheshunt. Their late hitting, including some sublime drives from teenager Turner, boosted the Knebworth total to 140-8 from their 40 overs.

Sean Carmody and Guy Johnston both claimed an early wicket as the Park looked to make a fight of it but they had no answer to the home side’s stylish No.3 and hard-hitting No.4 who took their side to the brink of victory. A couple of sporting retirements looked to make a game of it before Ian Pickering claimed two wickets in three balls to give a respectable gloss to the scorecard as Cheshunt ran out winners by three wickets.

On Sunday, Ross Courtney (78) and Sayf Khan (49) led the way for the Park with a spritely opening stand of 86 against Primrose Hill. Dave Lightning (27) and Phil Wheeler (32) pitched in with useful contributions in a total of 219 for 6 in 35 overs.

The visitors were making a brave first of the chase but the bowling of Joel Curtis slowed down the run rate and then they collapsed dramatically from 111 for 4 to 115 for 9, skipper Ian Woods taking 3 for 36 and Khan 2 for 7. Primrose Hill were all out for 142.