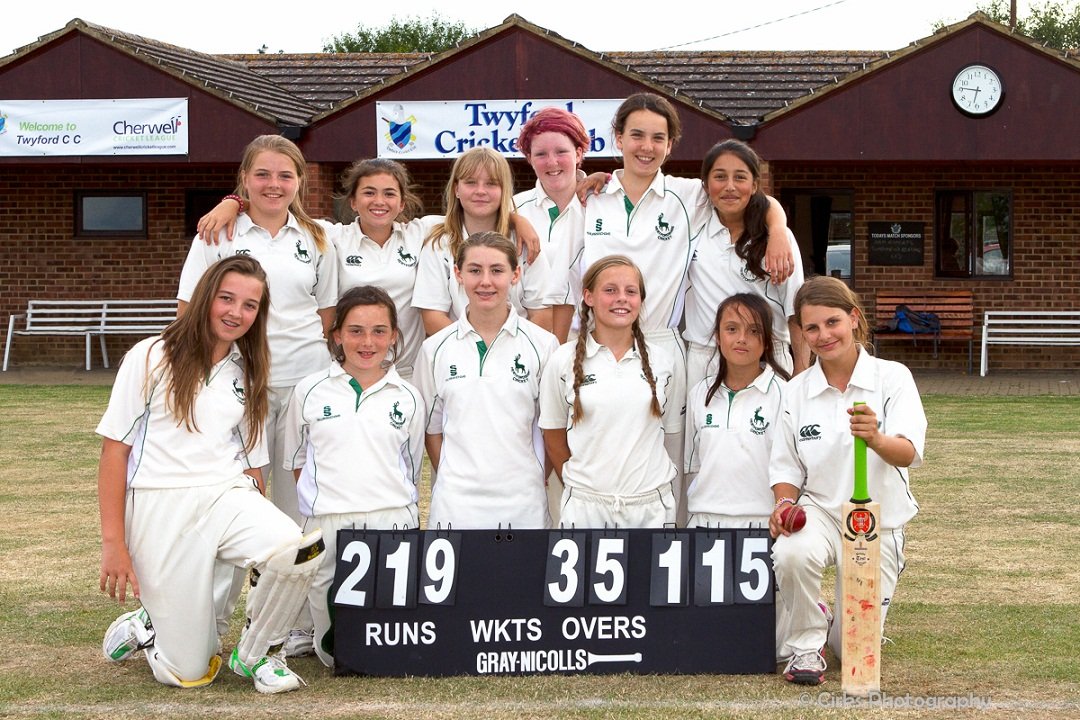 Welcome guests: The county under-13 girls squad with Catherine Cirkel, far right, after she struck her 115 earlier this season

Knebworth Park proved the host with the most yet again as the county girls under-13 squad held their end-of-season celebration on Sunday.

Our picturesque ground was bathed in early September sunshine as the girls took on a team of parents in a friendly game which ended in a diplomatically arranged draw.

The barbecue and bar was up and running thanks as ever to Mark Folwell and Nick English, who kept all the visitors suitably refreshed.

Even the sight of a huge branch falling from one of the trees couldn’t spoil the fun.

Under-13s squad manager Jonathan Cirkel said: ‘Everyone had a superb time and really showed all the non-KPCC girls and parents what a great place the Park is to play cricket and to receive hospitality.’

The county side has enjoyed a hugely successful season, winning six of their eight full county games and 16 out of 18 matches in all formats.

Six of the regular side are Knebworth players.

A special achievement award went to Catherine Cirkel for her innings of 115 – the first century by a Hertfordshire junior female. She was also the second leading run-scorer during the season (320 runs) and leading wicket-taker (11 wickets at 10.8) Another Park player, Izzy Choke, was handed the fielding award for her superb fielding throughout the season while she also proved to be a talented wicket-keeper when only taking up the role while on tour.

Jonathan added: ‘However, the day wouldn’t have been possible without the wonderful volunteering work of Slogger behind the bar keeping everyone suitably refreshed and Nick English (with only a day’s notice) running the BBQ in such a superb, happy manner.

‘Thanks also go to Ross Courtney for the pitch preparation again and to Russell Haggar for coming up to help with BBQ. Hopefully, the day also helped with club finances with the bar and BBQ takings.’

Knebworth’s girls can expect more accolades when the Herts Junior League awards are held at Radlett on September 19. Our under-15 team are the county champions and the under-13s were county runners-up.