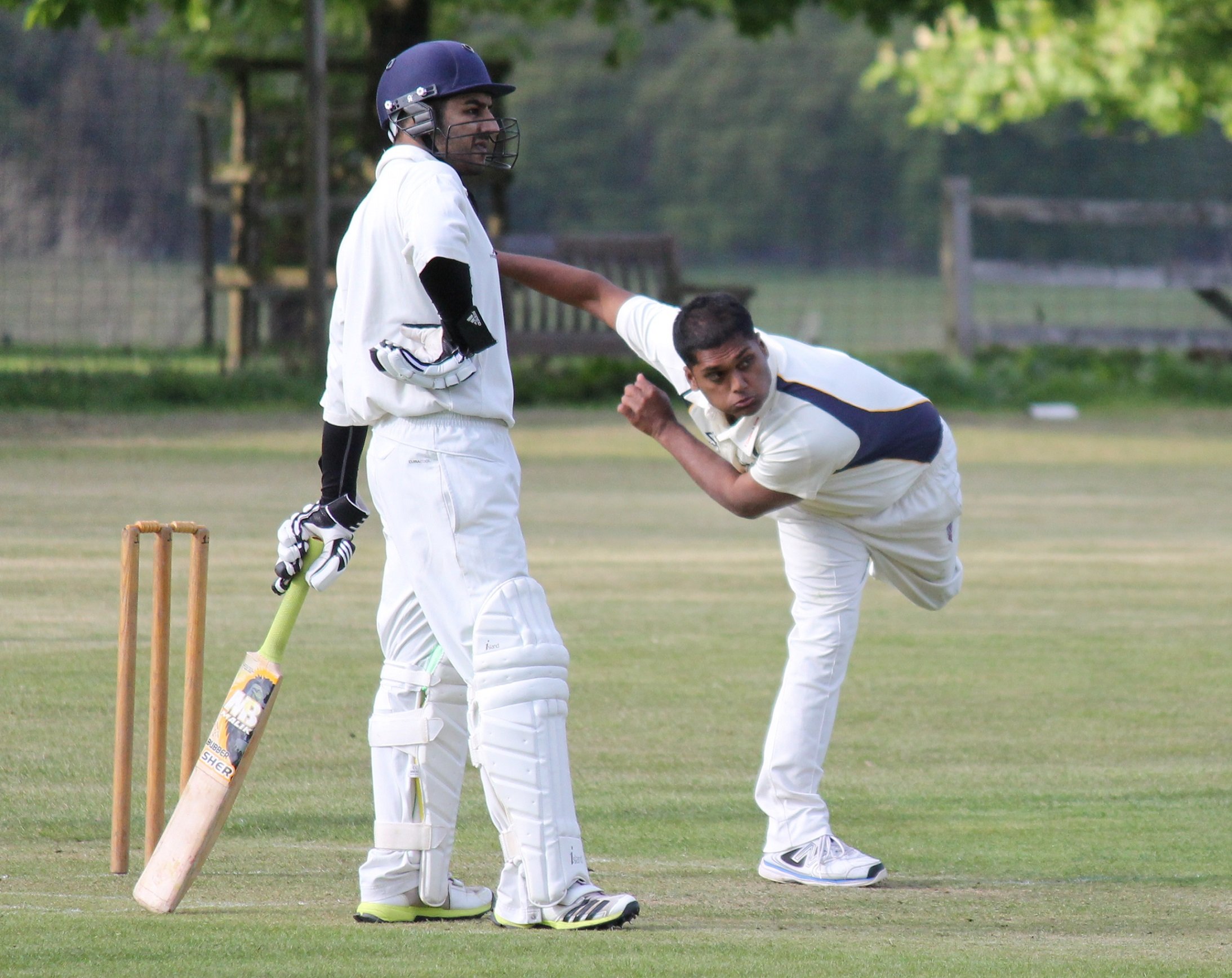 Looking to follow up the previous week’s thrilling victory against Hertford, Knebworth Park travelled to Chorleywood in hope of their first back-to-back victories of the season.

The team was unchanged and confidence was high. With rain forecast for the afternoon captain Charlie Randall won the toss and elected to field.

The first half of the game went exactly to script for Park as another strong bowling display put them in a strong position at the midway stage. James Leather, coming off the back of seven wickets, made the first breakthrough as he induced the Chorleywood opener into chasing a swinging ball to edge to Adam Sergeant at third slip.

The other opening batsman, Aspinall, decided to play aggressively and scored freely, timing the ball very well on a slow wicket.

James Leather picked up the second wicket as he bowled the Chorleywood No.3 with a ball that straightened slightly.

With Shaun Robinson having suffered against the fluent strokeplay from Aspinall, Parth Patel was introduced into the attack early on.

This delivered immediate results as he bowled Pendered with a ball that went on with the arm.

Aspinall continued to play freely, riding his luck at times but otherwise finding fluency that other batsman struggled for.

Control: Parth Patel was among the wickets with another good spell of slow bowling

Patel was able to chip away at the other batsmen, bowling two more of the middle order as they struggled with his excellent control of flight, their defences failing to deal with the fuller deliveries.

From the other end, Patel was now receiving excellent support from Tom Elliot who bowled a tight spell and was well rewarded with a wicket, drawing an edge that was safely pouched by Benji Cowell.

The last four wickets were also wrapped up without much resistance as Patel found the edge for his fourth wicket and then finally removed Aspinall to complete his five-wicket haul. James Leather then returned at the other end. First, he removed Rice LBW and then Bushnell clean bowled so that Chorleywood were 113 all out and lunch was taken.

The Park reply started well as Richard Leather and Phil Simpson were watchful on a wicket that hadn’t displayed consistent and true bounce in the first innings.

Simpson showed initiative, using his feet to play some assertive strokes. However, he fell to an excellent catch as he looked to pull a short ball that took an age to reach him.
Patel quickly followed caught at first slip to give Rice his second wicket.

Conditions were now looking ominous as dark clouds rolled in and it wasn’t long before the forecast rain came.

With three extremely heavy showers play was suspended for the best part of an hour and a half. Park were in a comfortable position at this point at 45-2.

When play resumed however, the game was no longer as one-sided as Sergeant fell LBW to Pendered without scoring and then Richard Leather miscued a return catch back to Rice to leave Park at 50-4.

Robinson and Randall played in a controlled manner initially but, with the heavy rain having seriously slowed the outfield, which had been like lightning in the first innings, scoring was difficult.

Randall, became frustrated and managed to lob a catch to cover off Pendered.

James Leather came to the crease and took advantage of two loose balls from Pendered to reduce the runs required by eight.

Robinson and Leather seemed to take to edge of the situation and looked calm at the crease.

However, after Robinson was dropped, drilling the ball hard and low at short cover, he became more frantic and was unable to regain his composure before being bowled.

With James Leather at the crease Park still looked favourites to reach the target.

However, he didn’t receive the support he required as first Cowell then Chapman fell in the same over to Pendered.

Bushnell was reintroduced to the attack and with all the pressure now on Leather he took on a shot that he may not otherwise have attempted, in the search of a quick finish to avoid exposing the tail-end.

His mistimed pull shot was well taken by the square-leg fielder who ran back and took the ball over his shoulder.

The game was then wrapped up by Bushnell who trapped Tom Elliott LBW to win the game.

In truth, it was a woeful batting display from the Park that cost them this game rather than any bowling brilliance from Chorleywood, as one soft dismissal followed another.

None of the batsman took the responsibility of seeing their side home and it prevented the Park completing what had at one point seemed like a certain victory.

An inability to chase has cost Knebworth on more than one occasion this season and undone hard work done by the bowlers.

Higher standards have to be set and more responsibility taken if Knebworth are to take their game to the next level.