Coach’s corner: Hold your nerve to beat ‘the choke’ 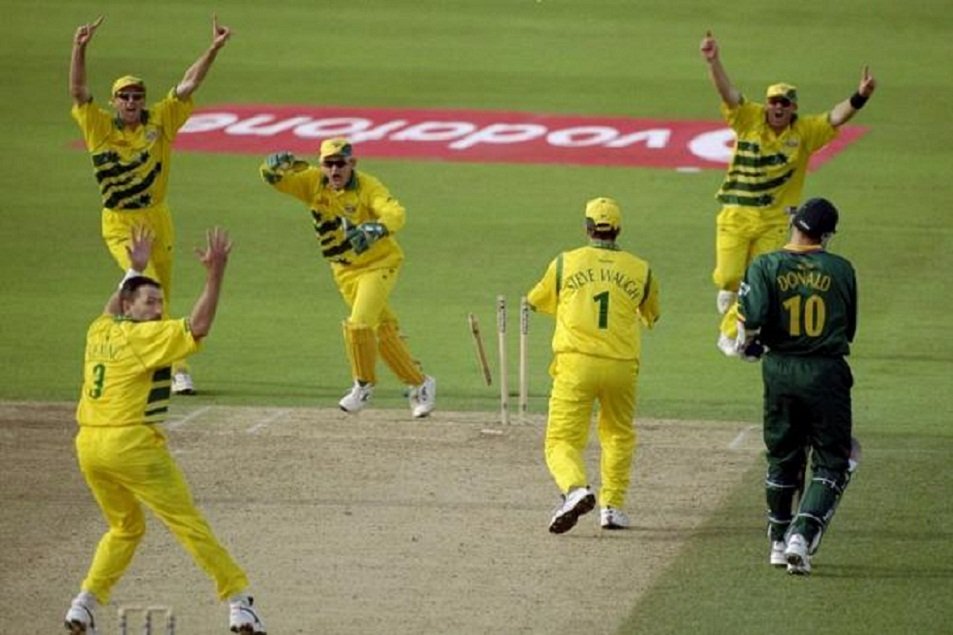 Fear of success: Allan Donald is run out in the most famous choke of them all PICTURE: GETTY IMAGES

After watching the Firsts throw away an easy victory by collapsing in their chase of just 112 on Saturday, coach KARUN JETHI offers his advice on how to cope with pressure

In my experience, chasing low totals is harder than chasing high ones.

The reason I believe is that while chasing high total, you know to a certain extent that the game is out of your reach so you don’t have that extra pressure of losing and you go out to bat freely and sometimes end up chasing that score.

In low chases however, you know for a fact that the game’s in your favour so you have the extra unnecessary pressure of the risk of losing and that’s how you end up making costly mistakes.

Let’s look at some situations where players are under pressure:

Scene 1: Imagine you’re fielding at long-off in your first club game at your home ground. The batsman strolls for a single. Most of the time you field the ball without fuss and throw it and that’s because it’s a routine drill for you.

Scene 2: Imagine you’re doing the above on your first-class debut. There are senior players, international players from around the world and even selectors, watching you and you want to do it absolutely right. You feel some nerves but nothing that you can’t handle. So you keep your eyes on the ball and ensure that you don’t fumble, and promptly return the ball to the keeper.

Scene 3: Now imagine you are playing for England at Lords in front of 20,000 people. The noise in the stadium is thunderous. You can hear the people in the stands behind you shout as they realise the ball is coming their way. The batsmen are pressing for a tough second run to put pressure on you. But you hold your nerve, pick the ball cleanly, throw it back and heave a sigh of relief.

Scene 4: Finally, it’s that time of your career when you made your Ashes debut and it’s the last ball of the final day and Australia needs two runs to win the game and you need to stop that for a draw that will win you the series. The ball is hit in your direction. They’re running hard and you need to pounce, collect it cleanly and make a solid and accurate return to ensure a run-out. All of this will happen in no more than a few seconds but the memories of that will last forever. One slip-up could cost your team the match and with it the Ashes. It may even cost you your place in the side. You could be the most hated guy in England. You will feel pressure like you have felt never before. You need nerves of steel to deal with this kind of pressure and that comes with constant mental and physical training.

Nothing is drastically different about those four scenarios – except for the degree of pressure involved. The ground remained the same, so did the power with which the shot was hit and the weight of the ball. But there’s a huge difference between fielding in a friendly and in an international match, especially when a match, trophy or career is at stake.

Fielding is a good example because luck and form play a smaller role in fielding than it does in batting or bowling. You might get a good ball while batting or the batsman might hit a great shot off a good ball you bowl, but with fielding there are few such issues.

1. Fear to fail: The desire to succeed gives birth to the fear of failure. Cricketers are taught the consequences of failure from an early age. If you don’t perform, you’re dropped from the side and you have to suffer criticism from teammates, coaches and even loved ones. It’s this fear that raises tension, especially at the beginning of an innings. Only a few can remain calm while facing their first ball or running in to bowl their first delivery. There’s always the fear of things going dreadfully wrong. The main thing that haunts a cricketer at any level is that he fails to produce then his career is over.

2. The higher the stakes, the bigger the fear: The fear of failure is at its peak when you’re playing for your place in the side. In the last home Ashes, Simon Kerrigan found himself in such a situation against Australia and the effect was quite visible. He would probably have played differently at any other time in his career but not on that day. He was cautious and did everything in his power to avoid failure.

3. Fear of success: A footballer missing a penalty kick to win the game, a basketball player missing the hoop at the buzzer and a batsman taking a non-existing single on 99 to reach his hundred are common. Anticipating success and the honours that come with it, joined with the fear of ruining all the hard work that has been put in, makes a player nervous near the finishing line. The mind is in two places: one part wanders into the future, planning the celebration, while the other is scared of stumbling at the last hurdle. As a result, the execution of simple skills becomes difficult and the ability to think rationally deserts the individual. Look at someone like Virender Sehwag; he will play his shots regardless of whether he’s batting on 95,195 or even 295 whereas even the greatest batsmen ever, Sachin Tendulkar, has the most dismissals in the 90s because he tends to change his game. Lance Klusener and Allan Donald did something similar in the 1999 World Cup semi-final against Australia. Klusener could have hit a boundary with ease and he had two more deliveries to go, but it all ended in a messy run-out.

4. Pressure from external circumstances: There are times when it’s not the match situation that puts pressure on you. Even the best, Sachin Tendulkar had a sleepless nights before the India-Pakistan clash in the 2003 World Cup. He doesn’t lose sleep over every international game but that wasn’t just any game – it was an India-Pakistan clash in the biggest tournament of them all. I’m sure English and Australian cricketers face the same situation during the Ashes. In these cases it’s not the quality of the opposition that puts you under pressure but the importance of the occasion and the expectations of people back home.

5. Under pressure, individuals respond differently: The pressure that you feel has a lot to do with the form you are in as well as the match situation. The pressure you feel while batting on 99 is completely different from when batting on 0. Two individuals facing the same opposition react differently mainly because of their natural game and the sort of form they are in. When you see Jonathan Trott and Kevin Pietersen batting together on day four of an Ashes test with 20 minutes of play left, regardless of what situation demands, you will always see KP playing his natural game and trying to make most of it while you’ll see Trott eager to get off the field. But it doesn’t really tell you anything about the attitude or the mental toughness of either batsman because the same KP might be in Trott’s shoes during a regular county game.

So how can you handle the pressure?

Different players have different ways of dealing with pressure: Tilakaratne Dilshan says that one must rein oneself in under pressure. Instead of going for a big shot when you’re not seeing the ball properly and your feet are not moving, take a single to get the other batsman on strike. Doing that gives you time to settle down and find form. Ricky Ponting says that the only way to do well under pressure is to work hard in the nets. While he agrees that quality of practice is very important, he believes the quantity also plays a big role. He adds that it’s almost impossible to produce it under pressure unless playing a certain shot or bowling a certain ball hasn’t become a habit. For example, if a sweep shot is your get-out-of-jail shot, you must perfect it in practice to execute it to perfection in a match.

Detach yourself from the hype: To handle the pressure better, you have to detach yourself from the importance of that game in order to perform to your potential. We, as players, tend to go with the flow in big matches and at crucial situations. One feels pressured to hit a big shot as soon as the asking-rate goes over seven. Even though the situation is not as alarming as it sounds – because seven an over is achievable with sensible cricket and a few calculated risks – the pressure gets to people. The best thing to do in these situations is to postpone the desire to hit a big one by five to ten minutes and play calculated cricket till then. But if you still feel the need to go for a big hit after ten minutes, then you should. The idea here is to think sensibly instead of going with the flow and hitting a cross-batted slog off a good ball. Always play to your strength instead of improvising to assist your weakness.

My coach in India always used to tell me that pressure is something you put on yourself. The scoreboard just shows digits and we get nervous or confident depending on how we read them. It sounds extremely simple but it isn’t.

Feeling under pressure is a state of mind and I think staying in the present and playing on the merit of the ball works for most. How you handle and react to pressure is what separates great players from good ones.