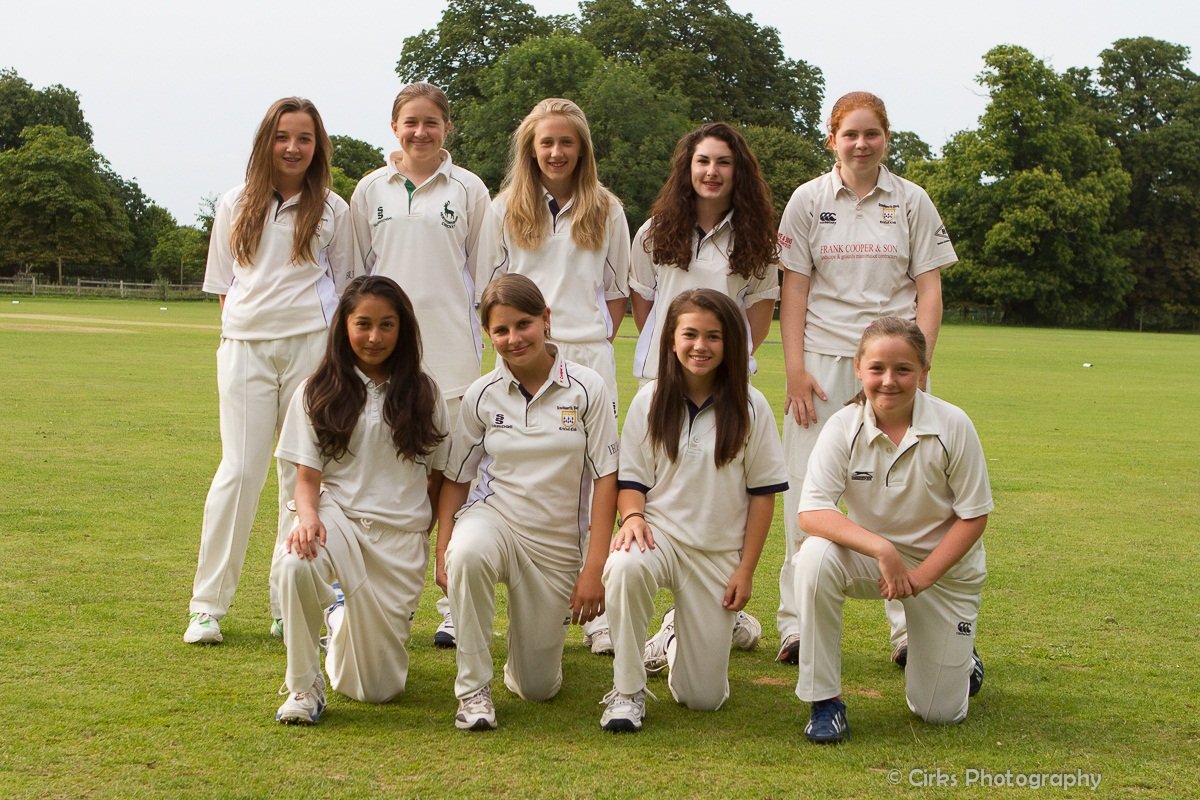 Winners: The under-15 girls are unbeaten this season. Team regulars Izzy, Daisy and Phoebe were unavailable

Although we attempted to play Berkhamsted last week, the heavy rain put paid to the match with just four overs bowled.

However, both teams were keen to replay the game to give the girls more cricket and not just share the league points.

Therefore, last night Berkhamsted again visited the Park for their final under-15 game of the season.

With a very strong batting line up, Knebworth were keen to bat first and set a big target for the visitors to chase.

The toss went our way and Kathy and Catherine opened the innings for us.  Unfortunately, things didn’t get off to a great start with Catherine bowled by her first ball at the start of the second over.

However, from then on, things went a bit more to plan. Although Kathy struggled briefly with the lack of pace and bounce, she soon got into her stride and retired on 33 in the eighth over having hit seven fours.

At the other end, Zoe, having replaced Catherine, also enjoyed her spell at the crease.

With Kathy and her starting by running some well taken singles, Zoe started to play some nice attacking drives (and waist/above-waist pulls).

With Kathy’s retirement, Amie came to the crease to join Zoe and almost immediately started to play some attacking drives with superb use of her feet including a fine drive through extra-cover and lofted drive over the bowler’s head, both with her coming down the wicket.

With Amie, Zoe continued batting well and, with a couple of pulls, she also accelerated towards her retirement on 30 in the 12th over.

So, the score was up to 100 for the fall of just one wicket and two retirements and therefore a very big score by the home team looked on the cards.

Unfortunately, things suddenly slowed when Charlotte W (replacing Zoe on retirement) was run out without facing a ball following what looked like an easy two from another drive from Amie.

Roz then faced a mixture of accurate bowling (which she played well) and some leg-side deliveries which were difficult to get away.

The score moved from 100 after 12 overs to just 107 after 15 when, having watched Amie using her feet so well earlier (not often you see players happy to leave the crease to play their shots), that she eventually was trapped LBW on the back foot.  However, it was a well-made 16.

With wickets in hand and potential ‘re-batting’ of the retirees, a real acceleration in runs for the last five overs was probably expected but, with the better bowlers for Berkhamsted returning, Charlotte B played a more defensive innings than we are perhaps used to and then, with the penultimate ball of the 20 overs, Roz’s innings was ended when she was caught and bowled.

The final score of 119-4, although lower than we would have hoped for, was always likely to be enough with Knebworth’s strength of bowling.  And so it proved!

Amie and Roz opened the bowling and the Berkhamsted girls couldn’t cope with Amie’s pace and accuracy and she finished with super figures of three overs, one wicket for four runs.

At the other end, Roz bowled well and was desperately unlucky with at least a couple of balls which only just missed the stumps.

If the visitors struggled against the openers, they struggled even more against the first change bowlers of Catherine and Zoe who then did the real damage.

Both bowled well with Catherine using some well-judged flight and Zoe bowling some lovely inswing and they were both rewarded for their efforts.

With Berkhamsted having just eight players (against our nine), we now only needed one wicket. Olivia came on and ended the innings with just her second ball.

So, the girls’ 100 per cent record continues with this dominant win.  Next match is against Harpenden at home on Monday (July 7).

Thank you to Natasha for keeping the scoreboard up-to-date and Oliver for taking the photos of the action. Click here to see all the images.