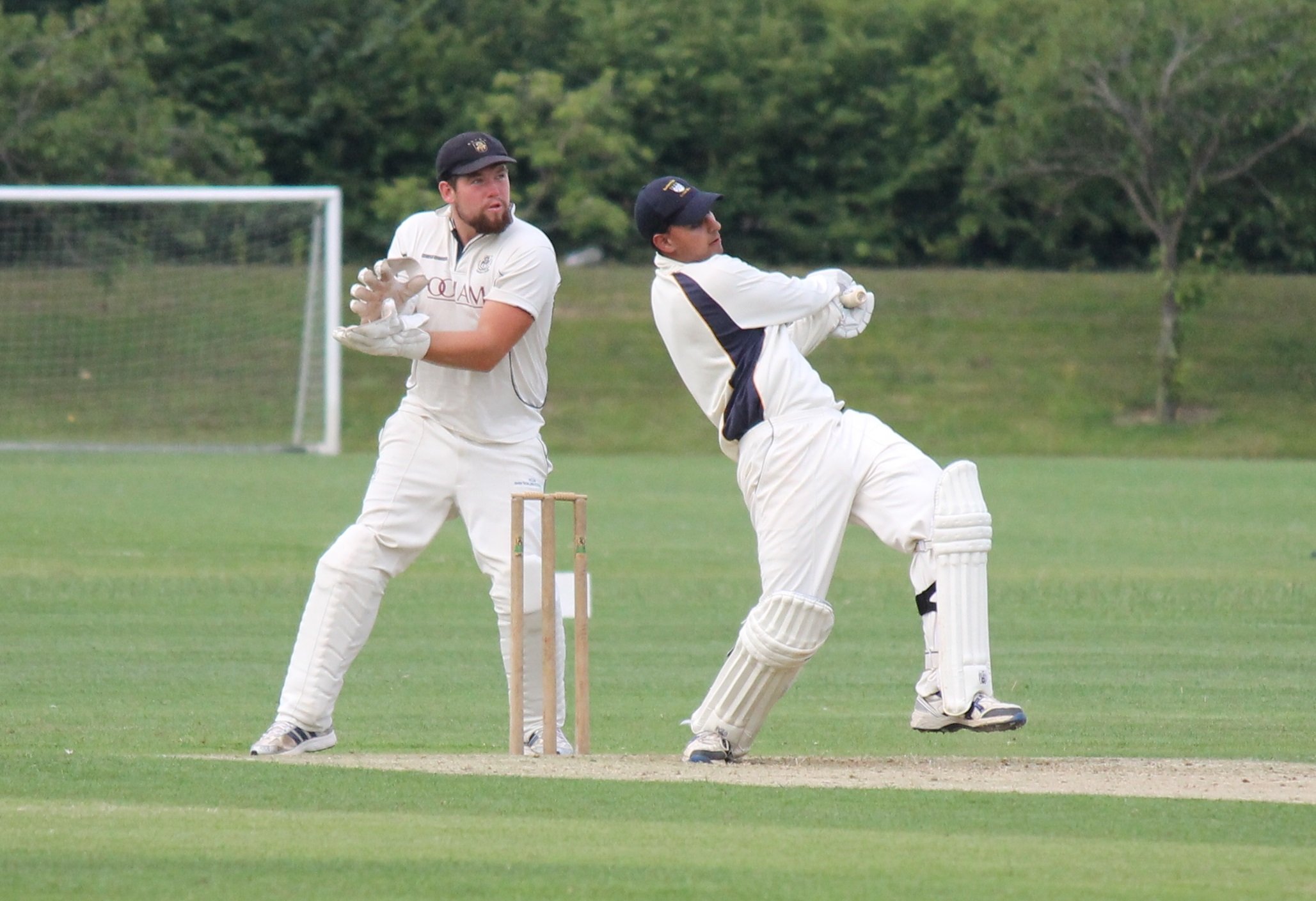 Savage: Sayf Khan launches another big hit on his way to a spectacular century

It was a moment to savour … high-fives, embraces from team-mates, congratulations all round and opponents left forlorn.

Saturday truly belonged to Sayf Khan, who smashed a thrilling 128 to secure the Thirds’ first victory of the season.

He cracked 18 fours and three mighty sixes in an all-action innings which might yet change the course of his side’s hitherto entirely disappointing season.

What made it all the more remarkable was that he batted for more than two hours in sapping, muggy heat without being able to take a drink as he was fasting for Ramadan, making it a display of extraordinary physical fortitude as well as one of extraordinary batsmanship.

Earlier, Hemel won the toss and chose to bat on a wicket that looked full of runs but was a touch soft so the ball was not properly coming on to the bat.

The home side were away quickly smacking 22 off the first three overs.

But the Park stuck to their guns and, for once, captain Graham Fisher had a full roster of seam bowling at his disposal.

Gareth Jones claimed the first two wickets, the second a bottom edge snaffled neatly by his dad Richard behind the sticks.

Then it was Pru Korivi’s chance to get in on the act as drinks brought two quick wickets, the first to Pickering’s champagne moment catch, the second neatly snaffled by Jack Thorn at short mid-wicket.

Thorn himself then got in on the act, returning the best figures of all the bowlers, with 3-21 off nine overs.

But the heat and some tail-end resistance started to tell on the Park as the eighth- and ninth-wicket pairs piled on 70-odd valuable runs, punishing some loose bowling and sloppy fielding, including four drops.

Fisher was the pick of the death bowlers, claiming 2-29 in 14 tidy overs.

After the tea break, though, it was the Sayf Khan show. Drafted in as an emergency opener, he was quickly away with some sumptuous square cuts to the boundary.

Soon, he was unfurling powerful yet classical full-bloodied drives and pugnacious pulls treating the Hemel bowlers with equal disdain.

Around him the wickets were falling regularly as no one seemed capable of staying around for long.

He was drained and gasping for a drink by the time reached 50 but somehow kept concentrating and never failed to punish the loose balls.

By the time he passed three figures no other batsman had got into double figures.

Finally, he was out stumped after missing with a weary heave off a spinner and, utterly spent, returned to the congratulations of his team-mates.

There was still work to do, however, with 30 or so runs still needed and only four wickets left.

When Max Burrows was adjudged LBW, it was down to bowlers Jones and Thorn to steer the side home.

They did so with some aplomb, Jones (26*) batting with great maturity and some skill, before Thorn heaved one back over the bowler’s head to seal a famous victory.

There is a full gallery of images here