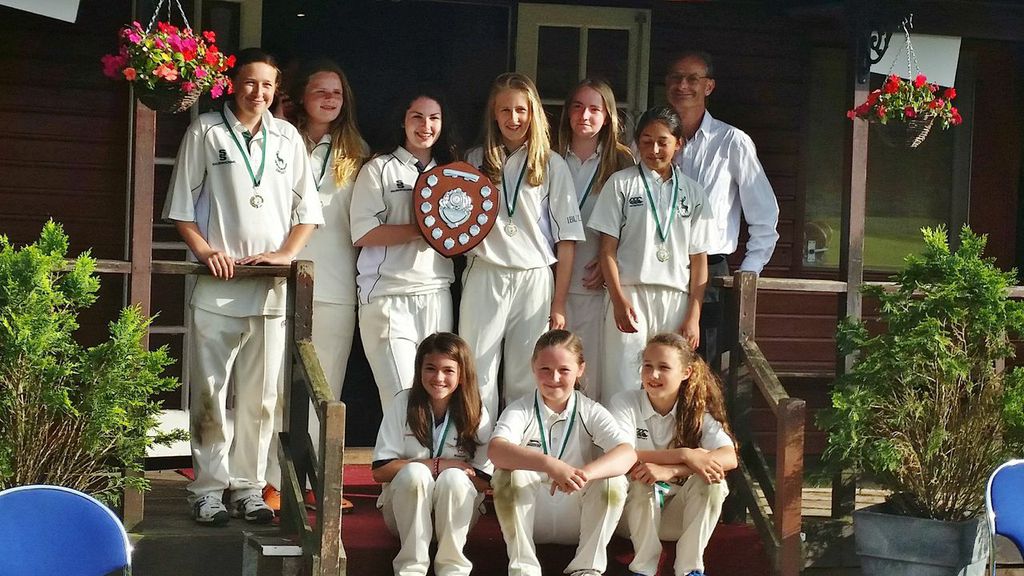 Winners: The girls pose with their trophy at the end of a thrilling game

The U15s league final between KPCC and Harpenden took place at Knebworth Park on a surprisingly – the forecast hadn’t been good – warm and sunny summer’s afternoon. Harpenden won the toss and elected to bat first on a wicket that had already seen two games earlier in the day.

The Park couldn’t have hoped for a better start, with two quick wickets off some challenging pace in Aimie’s first over.

A beautifully struck boundary was followed by a magnificent run-out with a direct hit from mid wicket to the non-strikers stumps, the fielder having no more than a stump-and-a-half to aim at.

The Park were certainly on top after four overs, with Harpenden struggling on 12-3. However, some wonderful resistance was ably demonstrated by the Harpenden No,4 batter as she threaded a series of shots between the attacking field for twos and boundaries.

Wickets continued to fall, however, as batsmen came and went but a little loose bowling in the middle overs provided some welcome extras to Harpenden, although this was somewhat counter-balanced by some excellent fielding throughout, including another superb run-out.

Harpenden were only able to score three boundaries in their 20 overs, closing on 62-9. The pick of the bowlers was Aimie with figures of 4-1-10-4, Ros collected three wickets and Zoe two

Harpenden had a reasonable score to defend but the Park came out showing intent from the start as both Phoebe and Zoe struck powerful singles off both of their first deliveries, although the bails were dislodged with the fourth delivery of the opening over to see the first wicket go down.

Harpenden’s bowling wasn’t as tight as the Park’s had been as more than 20 extras were accumulated in the middle overs.

Consequently, wickets were a little harder to come by as the score crept ever closer to the required target of 63.

Park. No.3 Amie continued to build her innings – which like Harpenden’s. No.4 – included a number of well struck boundaries, but when she was eventually dismissed for 21, her work had seemingly been done with the Park needing only three runs in four overs to take the title.

But nothing could have been further from the truth. Harpenden fought back with some excellent bowling and fielding, delivering three consecutive maidens and leaving the Park on 61-5 with one over to go.

With the parents from both sides going bananas between each delivery the tension was almost unbearable and, with four dots off the first four deliveries and then a wicket with the fifth it really couldn’t have been any more stressful. And that was just for the parents!

Harpenden needed to ensure no run was scored off the last ball and the Park just needed to run.

And so the last delivery came; the batter, Olivia saw the ball going gently towards mid-wicket but seemingly suffered from stage fright and forgot to run – until the screaming parents registered and off they went.

Harpenden attempted a run out, which was followed by all manner of confusion as both teams thought they’d won as, although a genuine bye had, in fact, been scored, the umpire had forgotten to signal as such as he’d clearly been consumed with all the excitement, too.

The Park were eventually declared champions, with the final score at 62-6, they beat Harpenden on fewer wickets lost.

There is a full gallery of images from the game here