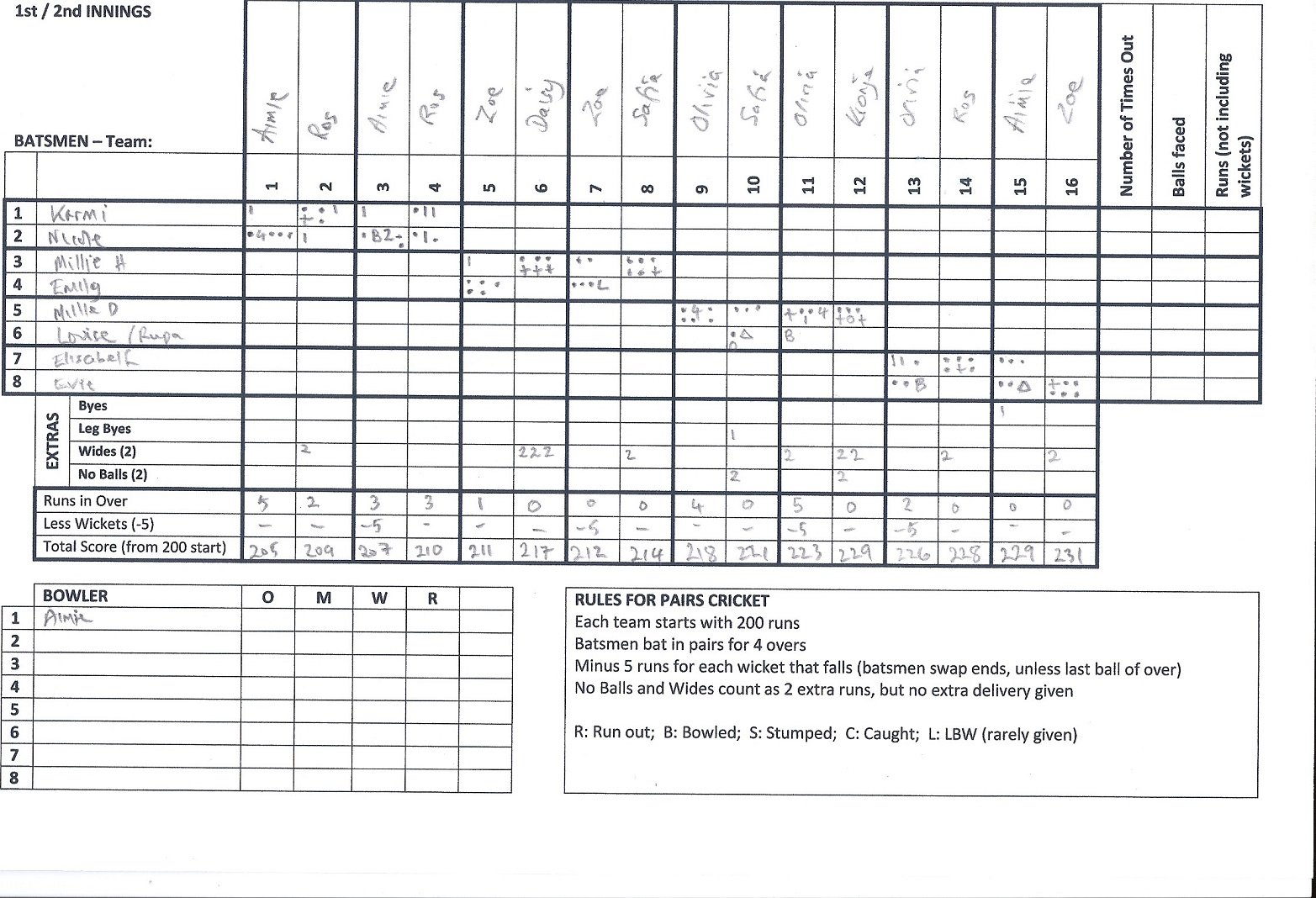 Despite the gloomy weather forecast for the girls county finals day, we did, in fact, enjoy a wonderful day of weather with long spells of warm sunshine. But that was just the icing on the cake, for we were treated to not one but two nail-biting games.

The first of three girls’ finals was for the under-13s age group, where Knebworth Park were to play Abbots Langley under pairs cricket rules.

Park lost the toss and were put in to bat. No doubt nerves were a little tense but both batters and fielders soon found their game although the Park’s first pair, Charlotte and Olivia, did succumb to a couple of deliveries that failed to find much bounce as the ball snuck under their bat onto the stumps.

Despite the loss of the two wickets, both batsmen had started well moving the score on to 208-2.

The Park’s next batting pair, Daisy and Safia, had difficulty getting bat on to ball as Abbots Langley conceded five wides and a no-ball but the opposition bowlers were rewarded with one more wicket in the spell.

With half the overs done, the score had moved on to 218-3. More of the same was to follow for the third spell, where the Abbots Langley bowlers were also proving difficult to score off.A couple of runs, a couple of wickets and a clutch of extras pushed the score on to 222-5 at the end of the twelfth over.

Park left their most promising pair, Amie and Zoe, to the last but their innings couldn’t have had a worse start as two wickets fell in quick succession following some much-improved bowling by the Abbots Langley final pair.

However, the Park kept their composure and although another wicket was to fall, several bad balls were clattered to the boundary pushing the final score to 230-8.

With a relatively low total to defend, the Park were well aware that wickets and restricting boundaries was the only recipe likely to work.

The Abbots Langley openers didn’t have much to play with but they scored well with the few chances they had and, with the pace of the Park’s openers, Amie and Zoe, proving difficult to play, Abbots Langley should have been pleased to concede just the one wicket in their opening spell, by which time the score pushed on to 210-1.

The second and third spells were very similar in pattern to the Abbots Langley innings, where few genuine runs were scored but slightly under par bowling yielded plenty of extras to the batting side.

Despite that, the Park were able to claim a couple of wickets and by the end of the twelfth over, Abbots Langley were within two runs of their required target of 231 with four overs to go. All the last pair had to do was score a couple of runs in 24 balls.

Notwithstanding the tremendous pressure on both batsmen and bowlers, the Park were able to strike in the 13th over, bowled by Olivia, as the fourth wicket fell. With the score now down to 226-4, Abbots Langley needed runs or extras.

And, while the last two Park bowlers, Amie and Zoe, gave almost nothing away, a well-run bye in the 15th pushed the score back to 229-4.

The excitement was almost too much to bear. Abbots Langley needed a couple of runs and the Park needed a maiden.

Sadly, the pressure came to bear as a most unlikely wide was delivered with the first ball of the final over.

The Park might have crumbled and Abbots might have got ahead of themselves but both sides fought to the last, with the Park unable to take that crucial wicket to take the game away from the opposition, who closed on 231-4 to take a well-deserved title.

Well bowled: The scorebook shows how well the girls performed in the field restricting Abbots Langley to 231