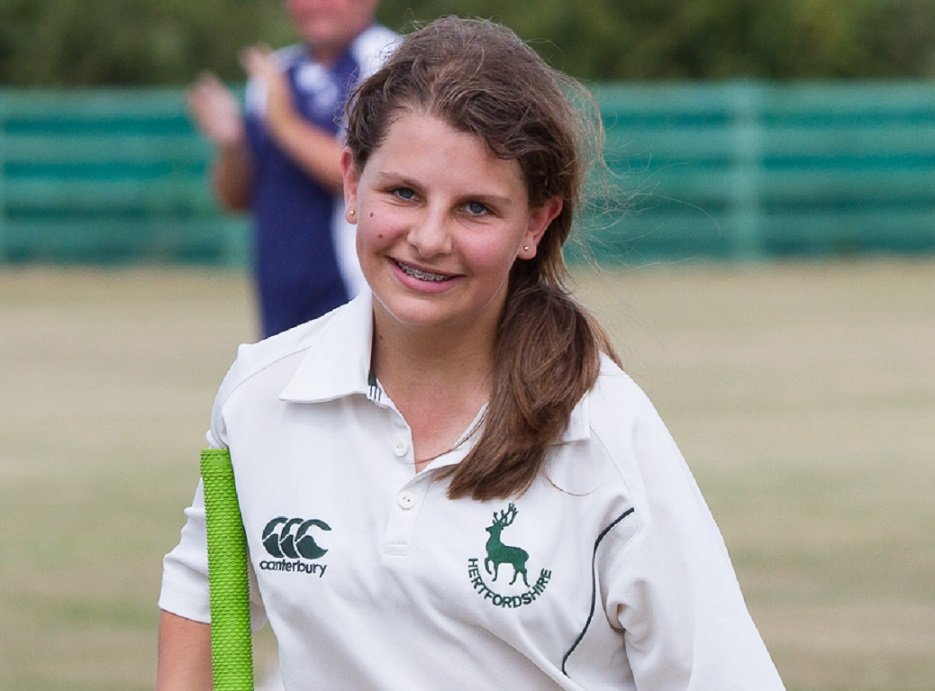 Flawless knock: Catherine Cirkel cracked 115 for the county side

They are rapidly becoming the jewel in our juniors’ crown – our talented girls’ squad which is sweeping all before them.

After clinching one county title and missing another by the narrowest of margins, five of our girls have just returned from an under-13s Hertfordshire tour based at Malvern College where they beat all-comers in a festival against teams from Suffolk, Staffordshire and Dorset.

They battled witheringly hot conditions to win every match, played in a variety of formats from a 20-20 to a two innings-style test match, on their four-day tour.

The super week for the KPCC U13 girls just got better on Sunday by a stunning 115 from Catherine Cirkel in a Hertfordshire county U13 match away against Buckinghamshire at Twyford CC. Coming in just 86 balls,  her 117min knock included 21 boundaries including a six and was a near-flawless innings which was a major contributor to the victory.

It was another sign of progress for the girls which saw under-15 captain Amie Chapman play for the Fourth XI in their league fixture on Saturday and win high praise from skipper Mark Folwell for her four tidy overs.

We have more girls representing county sides than any other club; in the under-13s, there is Catherine, Izzy, Safia, Charlotte W, Charlotte B, Roz and in under-15s Amie, Zoe, Phoebe and Kathy and in the under-17s Rachel and Vanessa, while Kathy, Rachel and Alice have appeared for the women’s team.

Girls coach Jonathan Cirkel, who is also county manager and assistant coach, has been delighted with their performances this year. He was particularly proud to see them win the under-15 title at the Park two weeks ago, although the under-13s missed out by just one run.

He said: ‘ It was a great cricket day and superb advert for girls cricket with KPCC hosting all three county finals and finishing with a win! The tension of the final, when we won by virtue of a scrambled bye off the last ball, ended a real roller coaster of emotions, from tears to unfettered joy.

‘It was great to see so many supporters, family and friends cheering them on, too.

‘In the league campaigns, both the under-13s and under-15s went undefeated. The under-13s played three and won three, although officially they had five victories out of five because the opposition conceded. In the under-15s, they won four out of four.

‘In fact, what makes the achievement of winning the under-15s league title so impressive is that it is pretty much the same girls in the under-13s and under-15s and, therefore, generally a younger average age than opposition teams – our youngest player is just ten.

‘Despite having several key players absent on finals day, winning one final and only just missing out on the other is a stunning achievement.

Jonathan continued ‘There are so many positives from this season, the club and county successes and the improvement in each girl’s game over the seasonas well as two new girls joining and playing who were completely new to the game.

‘The girls are one of the finest advertisements for Knebworth Park; they< try their hearts out, they train hard, are successful but, most of all, they enjoy themselves. For me this is cricket as it is supposed to be.

‘We would love to build on this success and see more girls playing the game.’

For further information on girls cricket please email girls@knebworthparkcc.com or call Jonathan on 07971 132415.

More pictures from Catherine’s knock in the gallery below