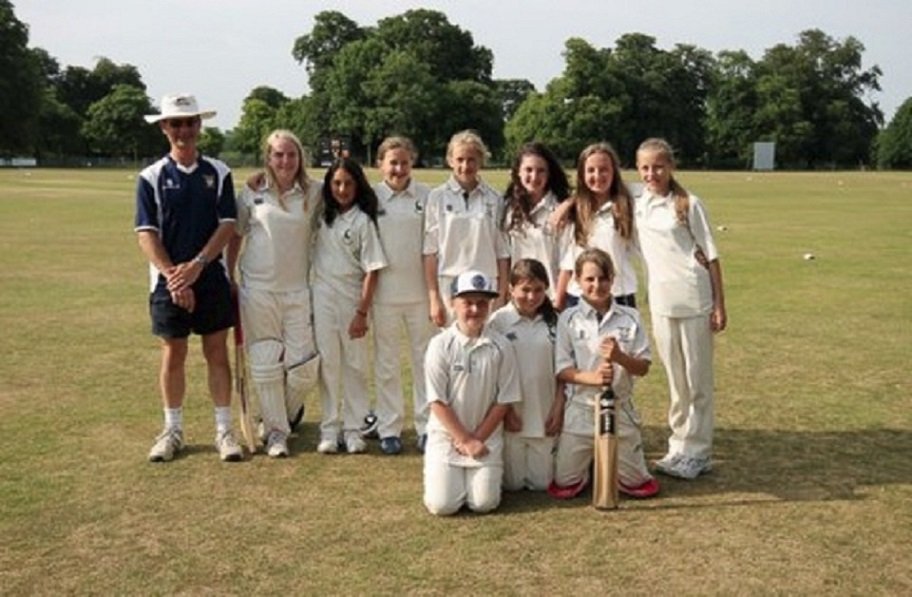 In the final again: The girls, seen here last year with coach Jonathan Cirkel, have now secured places in both the under-15 and under-13 finals

Having already secured a place in the U13 final, Knebworth Girls booked their slot in the U15 final with a convincing win against Harpenden.  The teams will meet again in the final though on July 13.

Having won the toss, Amie put Harpenden into bat on a dry pitch at St George’s School.

With Knebworth only able to field eight players against Harpenden’s ten, it was kind of the home team to lend us a couple of fielders thoughout the innings.

However, the excellent bowling of the KPCC girls was the highlight, despite a very short boundary around the pitch together with a fast outfield. Each of the bowlers maintained a great line to make life really difficult for the Harpenden batters.

Despite almost anything being hit past a fielder going for four, only eight boundaries came in the innings.

Amie’s pace caused issues for the openers and she finished with good figures of 3-1-11-1, while at the other end, Phoebe also bowled well for her two wickets finishing with 3-1-14-2.

It was the first change bowlers who really tied down the Harpenden run-rate though with the reduced pace meaning the batters had to do all the work.

Izzy kept a beautiful line to the right-handers with her left-arm over action and conceded just five runs from her three overs.  At the other end, Catherine was similarly difficult to get away and she finished with figures of 4-0-8-1.

With the innings just over half-way, the keepers swapped (Charlotte to Catherine) and the bowling remained tight.

Although there were a couple of boundaries (one edge) from Roz’s overs, her figures were more than respectable (3-0-15-1) and Olivia, continuing her impressive improvement this season, was well rewarded with a couple of wickets.

The last couple of overs were bowled by Charlotte and Safia with the latter getting a wicket with a well-taken catch by Amie.

The innings closed after the 20 overs with Harpenden on 75-8.  A superb effort by the bowlers with the fact that there were just six wides and four no-balls a testament to their accuracy.

The Knebworth girls started their run chase well with Phoebe and Izzy both scoring well.

Izzy fell to Harpenden’s best bowler just before the end of the fifth over though.  This brought Daisy to the crease for her highest batting position of the season so far and, despite still being new to the game, she did a great job at defending her wicket and responding superbly to the calling of Phoebe with well taken runs from the bat and byes.

Phoebe showed real maturity in her batting, playing some lovely drives (sometimes for no runs thanks to some good fielding) but also ensuring the ball went well beyond the boundary on numerous other times.

With seven boundaries to her name, Phoebe had to retire (31) but she had already set the platform for Knebworth’s win.

Amie came to the crease and she with Daisy (who hit her maiden boundary) saw us home.  Amie finished the game with a lovely drive through extra-cover.

Hopefully, the girls can continue their 100 per cent win-rate when they play their return rearranged fixture against Berkhamsted on Wednesday (after rain caused abandonment last week).